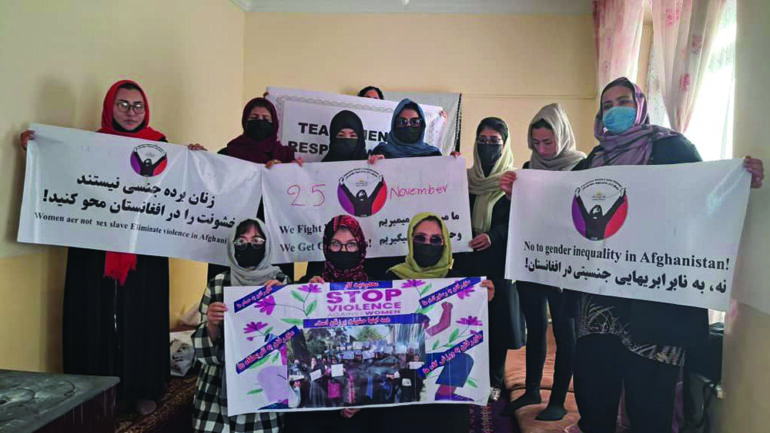 On International Day for the Elimination of Violence against Women, a group of women activists in a statement said that, recently, the violence and opposition of the Taliban against women have increased. They have urged human rights organizations and the international community not to leave Afghan women alone in such a situation. They also requested the international community to join Afghan women to stop this violence and help remove the restrictions imposed on girls and women since the return of the Taliban back to power.

In the statement released by these women on Friday, November 25, it is stated that arbitrary detention, mysterious murders, forced marriages, banning girls from learning education, and unequal job opportunities are what make the violence against women.

The protesting women and members of the “Women’s Movement for Justice and Freedom” have said that with an increase in the Taliban’s restrictions on women, they have endured mental, economic, political and social damages.

Afghan women are celebrating November 25 “International Day for the Elimination of Violence against Women”, at a time when they are deprived of their most fundamental rights, including the right to choose, study, work and freedom.

However, they [protesting women] have emphasized that they will never surrender to the barbaric “injustice and violence” of the Taliban and will fight and strive until they get their legitimate rights. “Women are not sex slaves” and violence against women must be stopped, these women emphasized.

The 16-day campaign against violence against women has started today, while the women of Afghanistan have gone through difficult days and nights for more than a year since the Taliban took control of Afghanistan in August 2021.

These restrictions have forced women to start protest rallies but the group’s de-facto regime, however, has violently dispersed these protests in different parts of the country.

However, the Office of the United Nations Assistance Mission in Afghanistan (UNAMA) has recently called on the de facto Taliban authorities to take immediate steps to end violence against women and the broader deterioration of women’s rights as a vital part of efforts to establish a meaningful and sustainable peace.