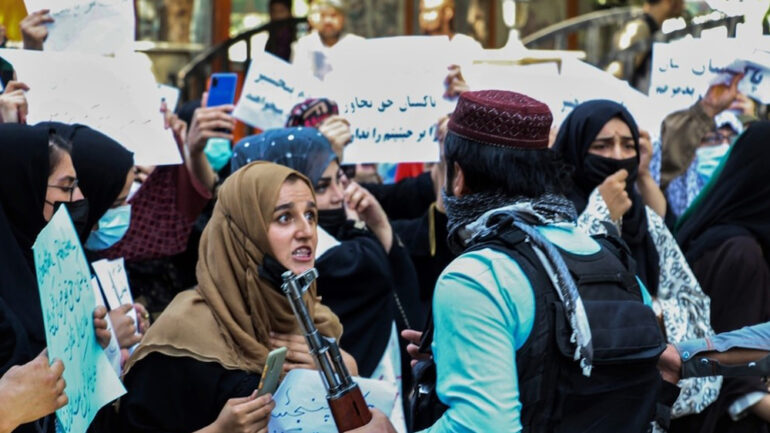 On the occasion of International Day for the Elimination of Violence against Women, the Office of the United Nations Assistance Mission in Afghanistan (UNAMA) has called on the de facto Taliban authorities to take immediate steps to end violence against women and the broader deterioration of women’s rights as a vital part of efforts to establish a meaningful and sustainable peace.

UNAMA published a statement today on November 25 stating that, since last summer, the most fundamental rights of women either restricted or rescinded in Afghanistan. In this statement, Afghanistan is called the country that has the highest rates of violence against women in the world.

According to UNAMA, Afghan women’s demand for coordinated, comprehensive and high-quality services is higher than ever before, but not only is this demand not being addressed, but their situation is worsening and they are facing gender-based violence.

The statement said that the situation is exacerbated by a dire humanitarian and economic crisis, and the restrictions on women’s fundamental rights, including the freedom to move, work, seek education, and participate in public life. “These factors have combined to reinforce some traditional social norms that condone the use of violence as a form of discipline and control, creating an environment where violence against women and girls is normalized.”, the statements reads further.

According to this statement, in the absence of laws and policies that protect and promote gender equality and women’s rights, and the introduction of decrees and edicts that contribute to systematically erasing women from public and political life, the underlying social norms that perpetuate inequality have been emboldened.

However, Roza Otunbayeva, the Secretary-General’s Special Representative for Afghanistan, said, “The fundamental rights of Afghan women need to be protected and concrete steps need to be taken for an enabling environment which is free from all forms of violence.”

“Protecting the rights of women is a crucial factor for stability, prosperity and any lasting peace in Afghanistan.”, Roza Otunbayeva added.

“Each day we continue to see the normalization of violence against women and girls, in their homes, places where they are allowed to work, online, and in public spaces,” said Alison Davidian, UN Women’s Representative in Afghanistan.

He called it impossible to create a violence-free environment for women and girls, but emphasized that there is a need to renew our efforts to invest in both the protection and empowerment of women and girls in Afghanistan.

The 16-day campaign against violence against women has started today, while the women of Afghanistan have gone through difficult days and nights for more than a year since the Taliban took control of Afghanistan in August 2021.

Since the Taliban’s return to power, the group has imposed severe restrictions on women and girls. Currently, girls above the sixth grade are not allowed to go to school, and female employees can no longer work in government offices. These restrictions have forced women to start protest rallies but the group’s de-facto regime, however, has violently dispersed these protests in different parts of the country.