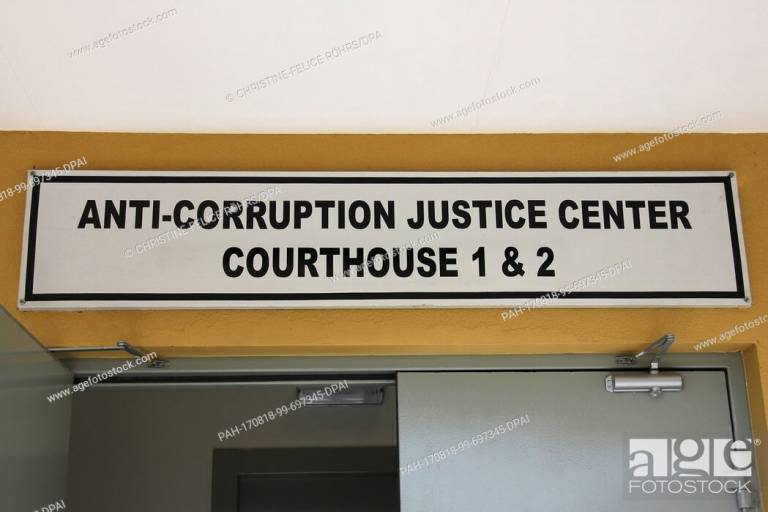 The new Anti-corruption Judicial Center can be seen in Kabul, Afghanistan, 24 July 2017. The property with offices and court halls built of containers...
KabulNow·February 9, 2021

The appeal court of the Anti-Corruption Justice Center (ACJC) has sentenced two staffs of the Ministry of Public Health to five years and one other to three years in prison, the Attorney General’s Office (AGO) said in a statement issued Monday, February 08.

Ghulam Sakhi Nazar, caretaker of the ministry’s central stock, and Ghulam Mustafa, manager of the stock’s delivery office, each have been sentenced to five years in prison while Ahmad Fawad, a technical trustee of the stock, was sentenced to three years in prison over charges of taking 80,000 USD as bribe, according to the statement. In an open trial of the ACJC, the three health employees were fired and fined to pay 80,000 USD.

In the open trial, the ACJC has acquainted four other employees of the health ministry.

On June 23, the AGO arrested a trustee of the health ministry on charge of taking 80,000 bribe from a private company.

Spokesperson for the AGO, Jamshid Rasooli, said that 300,000 protective clothes provided by the company were already transferred to the store, but the trustee was hesitating to process the required official documents in a bid to make “illegal benefits”, demanding bribe.

The AGO and other relevant authorities have arrested a number of government officials and employees over bribery charges in recent months.

On December 28, three senators, who were members of a delegation assigned to assess tax revenue in the northern Balkh province, were caught red-handed. President Ghani then removed two of the senators from their seats at the Senate.

Later, the senators were released on bail.

The court sentenced each of the three former senators to pay 40,000 USD as bail punishment.