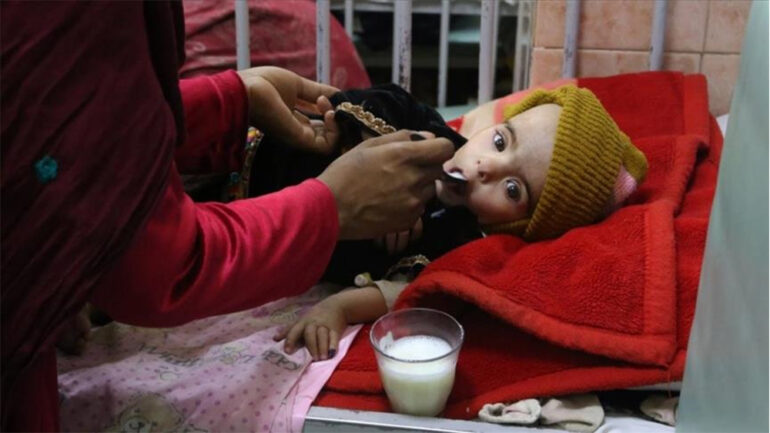 Child Malnutrition Spikes in Takhar; 11 Children Died in a Month

Health sources in the northern Takhar province report the spike in malnutrition cases among children in this province. 11 children have reportedly lost their lives in the last one month.

This statistic is reported from Takhar provincial hospital. A source in this hospital told Kabul Now that a number of 95 children struggling with malnutrition were admitted during the last month.

This statistic shows a significant spike compared to previous years, the source added.

The Taliban public health officials in Takhar province say that the number of children struggling with malnutrition in this province has increased as families are facing economic problems.

After the Taliban returned to power in August 2021, unemployment and poverty in the country peaked, and the foreign assistance rate decreased. The statistics from international organizations show that more than 97% of Afghan people are below the poverty line and need help to get through the cold winter ahead. ICRC has recently announced that almost 20 million people in Afghanistan currently do not have access to enough food, and more than 24 million people need immediate humanitarian aid.

A report published by ICRC on November 24 from 33 ICRC-supported hospitals across the country, shows child malnutrition cases increased by 90%  so far in 2022 compared to all of last year rising from 33,000 to 63,000 cases.

Abdul Qahar Ahmadi, the Taliban head of public health in Takhar, says that UNICEF supports 350,000 children in Afghanistan in order to prevent malnutrition. According to Ahmadi, hundreds of other children in the country are deprived of such assistance.

A number of families who took their malnourished children to Takhar’s specialized hospital say that they, due to poverty, cannot afford their children milk and food at the right time.

Ghiyasuddin, a resident of Bangi district of Takhar told Kabul Now that his child, hospitalized, is struggling with malnutrition due to lack of food items and vitamins.