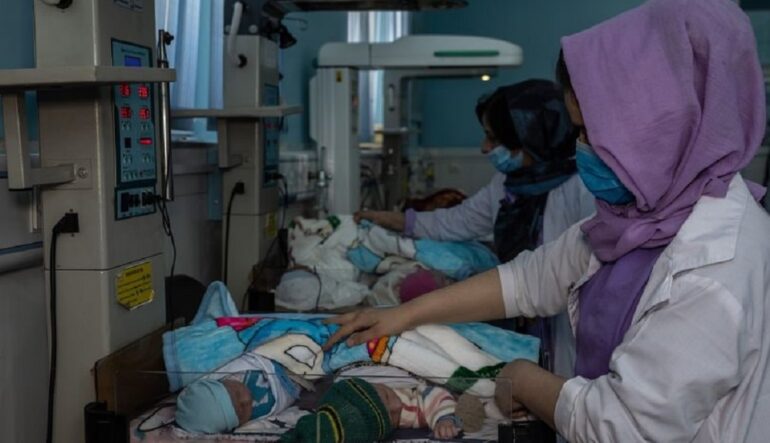 The International Committee of the Red Cross (ICRC) in Afghanistan reported that as winter approaches and the economic crisis worsens, Afghanistan is facing a spike in child pneumonia and malnutrition cases.

In the published press release on Thursday, November 24 from 33 ICRC-supported hospitals across the country, child malnutrition cases increased by 90%  so far in 2022 compared to all of last year rising from 33,000 to 63,000 cases, the Committee reported.

The cases of pneumonia among children have increased by 55% in 2022 versus the same period last year, ICRC further added.

“Afghan families face an impossible choice: To eat or to buy heat. And, really, they can’t afford either, resulting in a frightening rise in malnutrition and pneumonia cases,” Martin Schüepp, ICRC’s director of operations, said during his visit to Afghanistan this week.

This situation has led to an alarming spike in cases of malnutrition and pneumonia among children.

After the Taliban returned to power in August 2021, unemployment and poverty in the country peaked, and the foreign assistance rate decreased. The statistics from international organizations show that more than 97of Afghan people are below the poverty line and need help to get through the cold winter ahead. The International Committee of the Red Cross (ICRC) has recently announced that almost 20 million people in Afghanistan currently do not have access to enough food, and more than 24 million people need immediate humanitarian aid.

According to a new World Bank survey published on November 22, living conditions for families in Afghanistan are still difficult, as two-thirds of families struggle to meet basic food and non-food needs.