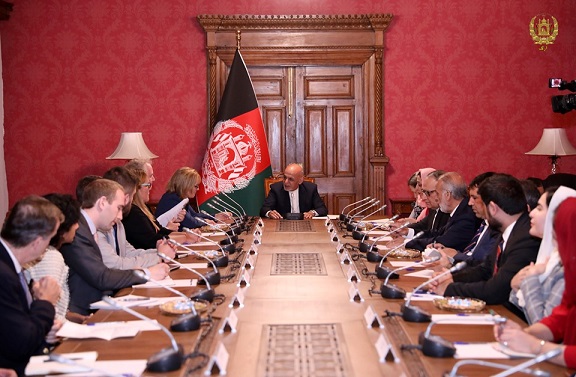 US supports sustainable peace in Afghanistan

In a statement issued on October 10, the Afghan presidential palace said the United States is committed to support a peace deal that will consolidate and strengthen the Islamic Republic of Afghanistan.

A US Senate delegation called upon the Afghan president Mohammad Ashraf Ghani on Wednesday, October 09, in presidential office here in Kabul to discuss issues related to peace, security and development. The delegation reaffirmed American’s commitment to sustainable peace in Afghanistan.

According to the statement, the US delegation underlined that the hard gains—women rights, free press, and elected system—Afghanistan has achieved in the last 18 years should be protected at any cost.

The 2019 presidential election was a success story and election is the base of a democratic system, the US delegation said.

Ashraf Ghani reiterated that republic was a redline for him and the Afghans, according to the statement.

Following a deadly Taliban car bombing in Kabul which killed a US soldier and 11 Afghans, on September 06, US President Donald Trump called off the US-Taliban peace talks which was underway for nine months.

The US Senate delegation visits Kabul while last week a Taliban delegation paid a visit to Islamabad to discuss Afghan peace process with Pakistani diplomats. The Taliban insurgents have been reluctant to open direct talks with the Kabul government — calling it a puppet government. On the other hand, the Kabul government have insisted on ceasefire, arguing that a sustainable peace is not possible unless the two sides announce ceasefire.