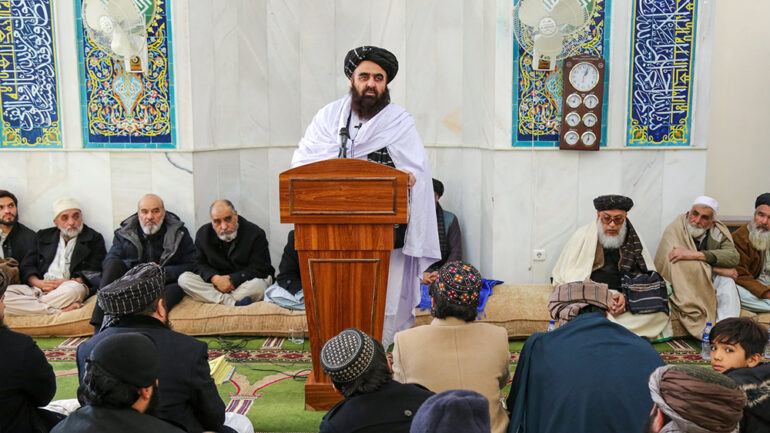 Admitting that Afghanistan is facing a “hunger” crisis, the Taliban foreign minister Amir Khan Muttaqi has indirectly blamed the United States and its allies for the hunger crisis in the country. He made this accusation in a speech on Saturday at the Ministry of Foreign Affairs.

“The occupiers and cruel people who killed the [Afghan] people over the past 20 years are behind these problems [hunger]. They were killing then by bombing, warplanes, and bullets and are doing it now by the hunger,” the Taliban minister is recorded as saying during his speech delivered in a funeral ceremony held for the victims of the deadly attack that targeted employees of his ministry last Wednesday.

Though the Taliban police primarily confirmed that five employees of the ministry were killed, later it was verified that at least 16 employees, including diplomats, were killed in the suicide bombing claimed by the Islamic State Khurasan Province (ISKP).

Moreover, the Taliban minister said that addressing Afghanistan’s crisis was a responsibility of the US and its allies.

On the other hand, he questioned the armed resistance going on against the Taliban rule in different parts of the country, arguing that it was not needed as there is “neither adultery, nor foreigners, nor occupiers, nor alcoholic drink, and nor non-believers” present in Afghanistan.

According to the UN, 28 million population of Afghanistan are in need of humanitarian assistance and six million are on the verge of starvation. Meanwhile, the Taliban has banned women from working for non-governmental organizations (NGOs) which has forced aid organizations with thousands of employees to suspend their life-saving humanitarian operation for millions of people facing hunger and famine across the country.