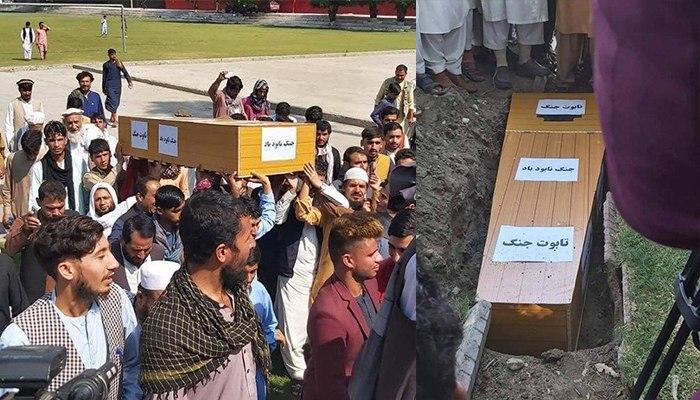 In a symbolic move, dozens of Nangarhar residents including religious scholar, tribal elders, civil society activists, and youths buried coffin of war in Jalalabad, capital city of the eastern province. They called on the warning parties to sign in to a ceasefire.

The rally was held today, Saturday, October 10, in Jalalabad to protest against the ongoing war and growing violence. “We are tired of years of war,” said Mawlawi Habibullah Jalalabadi, a participant of the rally. He further called on the Taliban and the Afghan government to sign in to a ceasefire and put efforts for peace.

Talking to Kabul Now, Abdul Razaq Hamdard, another participant of the rally, called on the people to stay united against the war, otherwise, as he warned, they will witness deaths of their elders and youths every day. “The war will continue and there will be dead bodies every day as now, if the people do not strive for bringing about peace in Afghanistan,” he warned.

The rally participants appealed to the government and Taliban negotiators not to set preconditions in order to reach a settlement.

Issuing a resolution, the rally participants said that they cannot endure death of their countrymen and women anymore.

This comes as the level of violence is still high across the country while negotiating teams of the government and the Taliban have got bogged down at earlier stages of the talks on negotiating principles and procedure of the negotiations.