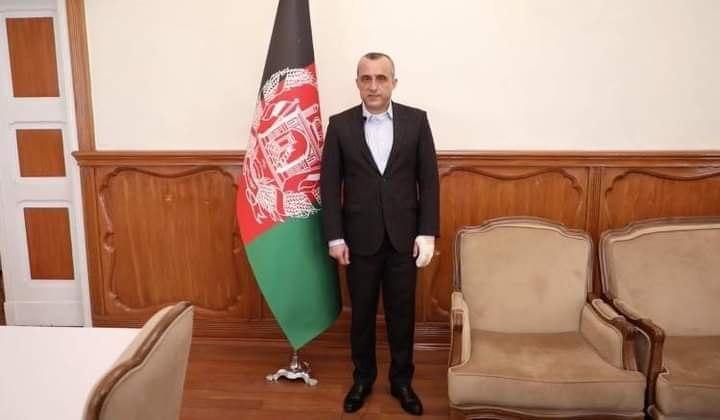 VP Saleh standing at his office in the aftermath of attack
Mokhtar Yasa·September 9, 2020

As many as ten people were killed and 15 others wounded after a roadside bomb targeted convoy of the First Vice President, Amrullah Saleh, around 07:35 AM this morning, September 09, in PD4 of Kabul city. Minutes later, he appeared in a video with bandaged hand, saying that his hand was slightly burnt while sending apology to those civilians who were hurt by the attack.

Spokesperson for the Ministry of Interior, Tariq Arian, detailed that some security men of Saleh were among the wounded victims. He noted that the casualty toll was expected to increase.

Soon after the news came out, Zabihullah Mujahid, a spokesperson for the Taliban, rejected the group’s involvement on twitter. “Blast in Kabul has no relation with the Mujahidin of Islamic Emirate.”

No other group has claimed responsibility for the attack either.

Today’s Kabul attack was widely perceived as negatively consequential for upcoming peace talks with the Taliban.

The attack was followed by broad condemnations from Afghan politicians and foreign diplomatic missions, mostly denouncing it as a “cowardly” and “terrorist” attack. They went on to describe the deadly incident as a move against the peace process plotted by “spoilers” of peace efforts. Most of government officials, including President Ghani, VP Sarwar Danish, and Chairman of the High Council for National Reconciliation (HCNR), Abdullah Abdullah visited Saleh at his office.

President Ghani rushed to VP Saleh office and later said that his first VP was in good health condition. He condemned the attack and shared condolences with the victims. “The terrorists and their foreign backers cannot weaken the strong faith of the people in peace, the Republic, and the bright future that our countrymen are demanding,” Ghani said in the statement.

“We strongly condemn this cowardly and terrorist attack and call on [security] institutions to undertake a serious investigation,” Abdullah wrote on Facebook.

Several diplomatic missions, including India and Pakistan, were quick in condemning the attack and sharing condolences with the victims. Spokesperson for India’s Ministry of External Affairs, Anurag Srivastava, condemned the attack as a “cowardly terrorist attack”, adding that India stands with Afghanistan to eradicate terror infrastructure and sponsors for enduring peace in Afghanistan. Expressing “relief” for survival of Saleh in the attack, Pakistan’s Ministry of Foreign Affairs also condemned it as a terrorist attack.

However, Indian media largely started to relate the attack with Saleh’s remarks in an exclusive interview with TOLONews aired last Sunday, September 06, on raise of the Durand line issue. As in his televised remarks, he had written on his twitter account that “No Afghan politician of national stature can overlook the issue of Durand Line. It will condemn him or her in life & after life. It is an issue which needs discussions & resolution. Expecting us to gift it for free is un-realistic.  Peshawar used to be the winter capital of Afghanistan.”

The attack was denounced by US Chargé d’Affaires Ross Wilson who said he was “shocked and dismayed” for the attack on Saleh. “We strongly support efforts that we hope begin soon in Doha toward lasting peace and an end to this kind of violence.”

“We are glad that he remains unharmed. This is an attack on the Republic, & desperate act by spoilers of peace efforts, who must be collectively confronted,” EU Delegation in Afghanistan reacted via a tweet while strongly condemning it as a cowardly attack. Dooming the attack, NATO’s Senior Civilian Representative in Afghanistan said that enemies of Afghanistan continue to ignore the will of Afghan people to stop violence and start intra-Afghan negotiations.

UN Secretary General Special Representative for Afghanistan, Deborah Lyons, and Canada’s Ambassador in Kabul, Dave Metcalfe, also reacted regarding the incident with the first expressing “shock” for high civilian casualties and the later calling for stopping what he described as “unnecessary” violence.

VP Saleh, who is a vocal critic of the Taliban, often accuses Pakistan of harboring and funding the militant group. Last year, he was targeted in a complex and deadly attack. As many as 20 people were confirmed dead and nearly 50 others wounded in the attack but Saleh was rescued unharmed to a safe place.