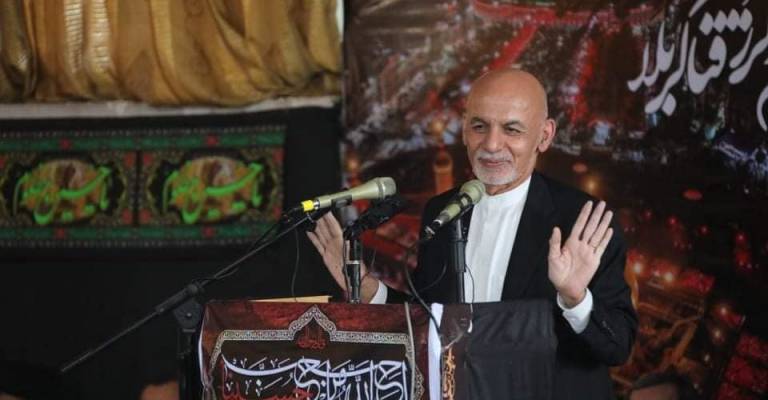 Pres. Ghani asks people ‘not to be afraid of peace’ in Ashura speech

Addressing a large gathering of mourners on Ashura, August 30, in western Kabul, President Ghani called on the people “not to be afraid of peace” noting that peace is to fulfill the Afghan people demand to end violence and bloodshed. He added that peace is not a power-sharing political deal.

Reiterating the protection and promotion of the republic as a governance system of all people, he asserted that the time when a minor group ruled over the country was over. According to him, the republic system is capable of bringing all the Afghan society under its umbrella.

Speaking at the same ceremony, Sarwar Danesh, second vice president, said that a dignified and lasting peace was compatible with the republic.

Citing the formation of the National Reconciliation Council, announced on August 29, as part of the government efforts for the peace process, Mr. Danesh called on the Taliban to come to the negotiating table.

Despite national and international efforts, the Taliban are still reluctant to negotiate directly with the Afghan government. The group insists on the complete release of their prisoners by the government.

The Afghan government, however, says that the remaining 320 Taliban prisoners will be released after release of Afghan commandos kept under the custody of the militant group.

Though major cities, particularly Kabul, witnessed deadly explosions in past years, the 10-day Muharram and Ashura were marked – under strict security measures – without any major security incidents this year.

People’s cooperation with government forces and security guards assigned by mosques are said to have played key roles in ensuring security of the religious ceremonies held during the 10-day mourning across the country.