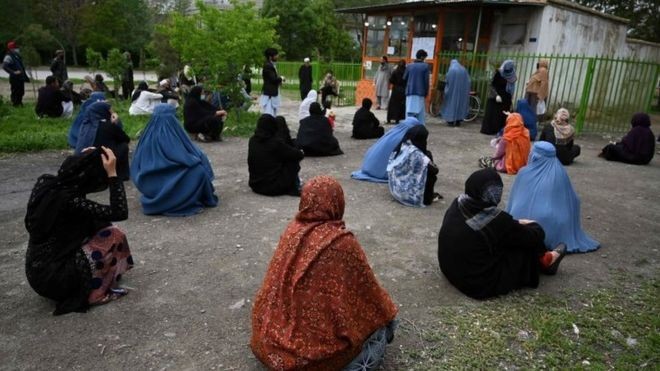 President Ghani initiated a two phased nationwide Covid-19 relief program on Saturday, July 18. This relief program, which is worth USD 244 million, will be funded by the World Bank and the Afghan government. The program title “Dastarkhane Milli”, literally means national food table, is the third relief package since the outbreak of coronavirus in Afghanistan, with the previous ones widely criticized as marred with embezzlements, waste of money, and large scale corruption.

Speaking at the launch event, First Vice President Amrullah Saleh detailed that the program would be implemented by executive organizations and local community councils. As he stated, in the first phase, a total of USD 86 million relief packages including wheat flour, rice, bean, cooking oil, and soup will be distributed for the people in need. He said that the relief packages will be distributed to a total of 1,600,000 households across 34 provinces in the first phase.

In the second phase, VP Saleh added that a total of 2,500,000 households will come under coverage of the relief program in all over the country.

According to him, people, the civil society organizations, religious scholars, and local elders can oversight implementation of the program.

Will packages be distributed fairly?

The program is launched as there are wide criticisms among the public of wasting the Covid-19 allocated funds in previous packages aimed at building Covid-19 isolation centers and assistance delivery program, mainly bread distribution, for the needy families. A recent investigative report issued by the Daily Hasht-e-Subh newspaper revealed that more than 800 million afghanis have been wasted and peculated in bread distribution in the capital Kabul. An earlier report published by the Daily Etilaat-e-Roz newspaper suggested that the bread distribution program and other aid initiatives of the government were widely prone to disorder and abuse of the authorities. A total of two billion afghanis had been allocated to the bread distribution program.

Government officials, however, have rejected peculation or embezzlement in bread distribution process. In reaction to the reports, VP Saleh stated that the bread distribution was implemented without any additional administrative costs in a direct cooperation between the government and the people.

Taking the same position as his VP, Ghani further went on to thank those who organized and designed the bread distribution initiative. Citing the country’s National Statistics and Information Authority, Ghani denoted that the authority has so far found that 73 percent of the people in need have taken advantage of the initiative. He described the government’s aid initiatives as “urgent and suitable” for the current situation. Acknowledging a partial waste of the funds, the President warned that those who are found involved in embezzlement and peculation of the government aid initiatives will be prosecuted seriously.

“Hunger and poverty are disaster, not an incident. The contractual relationship between the nation and the government can be proved in such circumstances,” President Ghani stated.

The third relief program is launched as official figures – highly unreliable – suggest a descending trend in cases of the coronavirus across Afghanistan. Movement restrictions and lockdown are also lifted in almost all parts of the major cities and businesses are mostly back to normal. Government officials, however, still see the virus spread as a serious threat.

Describing the virus spread as a “serious threat” in the launching event, Second Vice President Sarwar Danish asked the international community and donors to keep their assistance pour to Afghanistan.

According to latest updates provided by the Ministry of Public Health today, July 19, 174 people have newly tested positive for the coronavirus increasing the total infection toll to 35,463 cases in Afghanistan. With 361 covid-19 patients recovered over past 24 hours, the total number of recovered patients have reached to 23,461.

With 17 new deaths caused by coronavirus pandemic, a total of 1,181 patients have lost their lives to the virus so far.