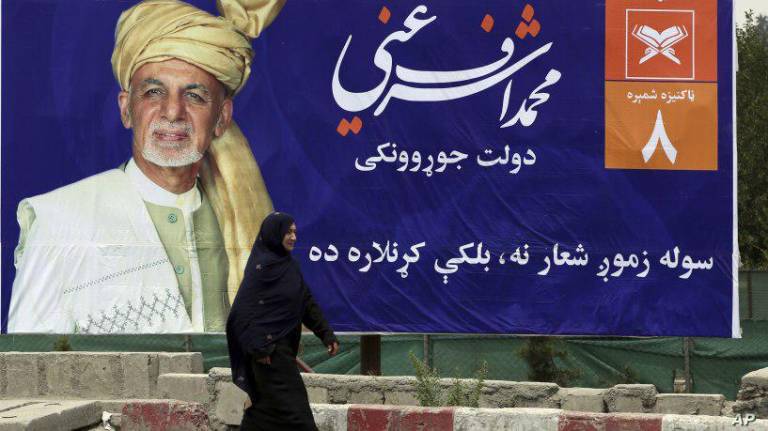 An Afghan woman walks past an election poster of current president and presidential candidate Ashraf Ghani during the first day of campaigning in Kabul, Afghanistan.
Ezzatullah Mehrdad·August 4, 2019

The overlap of the US-Taliban peace talks and the presidential campaigns raises a question: can the scheduled presidential election or the ongoing peace talks bring sustainable peace in the country?

“The problem is that they [Afghan warlords] want to receive thousands of dollars as daily stipend,” said Ashraf Ghani, referring to crackdown on warlords.

Speaking in a campaign rally, Mr. Ghani vowed that in his reelection, he would finance the Afghan security forces by national revenues, removing Afghan forces’ dependence from foreign money.

On July 28, Abdullah Abdullah, the incumbent chief executive of National Unity Government, who is also running for 2019 presidential election, launched campaign. Abdullah criticized his partner, Ashraf Ghani, and accused him of centralizing the power. “We seek a peace deal that assures rights of citizens of the country,” said Abdullah. “We are ready to make sacrifice to restore peace.”

Speaking among his supporters, Mr. Abdullah promised that he would work on security, economic development and improving ties with regional countries and international community.

Rahmatullah Nabil, former chief of Afghanistan’s intelligence agency, was the third presidential nominee, who launched campaign to win the election race. On August 3, Nabil addressed a crowd of his supporters, who had gathered in Loya Jirga tent. He criticized President Ashraf’s government, saying it was time for a new candidate to take the lead of the country.

Nabil, whose running mate is former minister Masuda Jalali and Gen. Murda Ali Murda, pledged that his government would give equal opportunities to citizens, distribute the resources equally among all ethnic groups, and give equal space to Afghanistan’s youths to take over key positions in national institutions.

The 2019 presidential campaign heats up amid intensified diplomatic efforts by the United States to end the 18 years long insurgency in Afghanistan. Senior US diplomats started a fresh round of peace talks with the Taliban in Qatar’s capital Doha on Saturday, describing it to be the “most crucial” phase of negotiations.

The eight round of talks take shape after US officials underlined that the Trump administration was preparing to pull out thousands of troops from Afghanistan in exchange for concession from the Taliban, including a cease-fire and a complete renunciation of Al-Qaeda.

The development in peace talks, which raised hope for ending the ruthless Afghan war, pushed many Afghan politicians to prefer peace deal with the Taliban over holding presidential election. Hamid Karzai, the ex-president of Afghanistan, talking in a televised press conference, said that the presidential election at this time did not serve interests of the country.

Neither peace talks nor the election has made a significant difference in the combat between the pro-Afghan government forces and the Taliban insurgents. The upcoming election, however, is expected to be bloody.

On the first day of presidential campaign, suicide squad targeted the Green Trend headquarter, political office of Amrullah Saleh, a running mate of Afghan President Ashraf Ghani. The attack killed 20 people and left 50 others wounded, according to Afghan officials.

The Taliban denied responsibility for attack, though Saleh, who served as spy chief of the country, accused the group for the attack on his office.