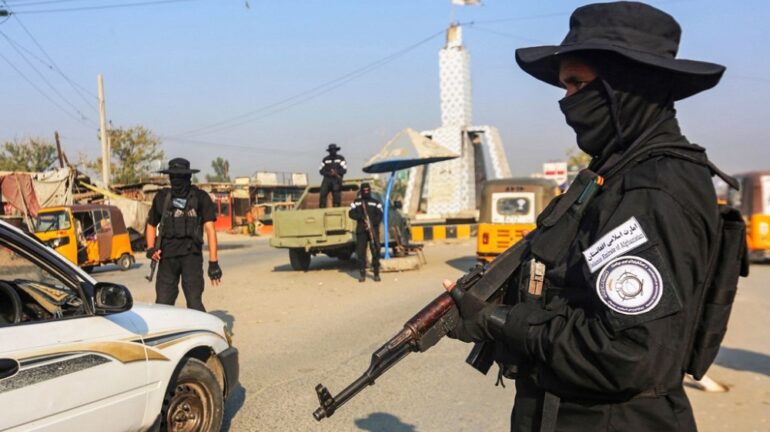 The public execution carried out by the Taliban under Qisas punishment – retaliation in kind – and attended by top leaders of the group in the western Farah province has drawn worldwide reactions. The United Nations, Amnesty International, United States, UK, and France have all condemned this public execution.

UN Human Rights Office stated that the public execution by the Taliban constitutes a form of “cruel, inhuman or degrading treatment or punishment”.

According to Jeremy Lawrence, public executions are arbitrary in nature and contrary to the right to life protected under the International Covenant on Civil and Political Rights, to which Afghanistan is a State member.

Jeremy Lawrence has urged the de facto Taliban authorities to immediately stop any further executions and act swiftly to prohibit the use of the death penalty.

The Office of the United Nations Assistance Mission in Afghanistan (UNAMA) has said that the United Nations “strongly opposes the death penalty under any circumstances”. Via a tweet on Wednesday, December 07, UNAMA called on the de facto Taliban authorities in Afghanistan “to establish an immediate moratorium with a view to abolishing the death penalty”.

Amnesty International condemned public execution by the Taliban in Farah.

The return of public executions in Afghanistan is the latest phase in Taliban’s alarming abuse of human rights in the country, said Dinushika Dissanayake, Amnesty International’s Deputy Regional Director for South Asia.

“All executions violate the right to life. Those carried out publicly are a gross affront to human dignity which cannot be tolerated”, stressed Dinushika Dissanayake in the statement published by Amnesty International on Wednesday, December 07.

Dinushika Dissanayake continued to add that carrying out public executions adds to the already cruel, inhuman and degrading nature of the death penalty. Such executions can only have a dehumanizing effect on the victim and a brutalizing effect on those who watch the execution.

Amnesty International stressed that such public executions perpetuate a culture of acceptance of violence, rather than a belief in justice.

US and UK’s Reactions

Reacting to public executions carried out by the Taliban, Ned Price, the spokesman for the US State Department, said that the Taliban’s action shows that the group is seeking to return to its regressive and exploitative practices in the 1990s.

Ned Price said that public execution is an affront to the dignity and human rights of all Afghans.

“It is a clear failure by the Taliban to uphold their promises”, emphasized Ned Price.

The spokesperson of the US State Department has said that this country is closely monitoring the Taliban’s treatment of the people of Afghanistan. Ned Price added that [US] has said publicly and also in private interactions with the Taliban, their relations [Taliban’s] with [US] and the international community completely depend on their [Taliban] own actions.

Hugo Shorter, the Chargé d’Affaires of the British Embassy in Afghanistan, called the public execution ‘deeply concerning’ and said that this act is inhumane and retrograde.

He added that the UK opposes the death penalty under any circumstances.

In a statement published on Wednesday, December 07, the Foreign Ministry of France condemned in the strongest possible terms the public execution carried out by the Taliban in the western Farah province.

The Foreign Ministry of France termed the execution a ‘horrific’ action and highlighted that this is a violation of the fundamental rights and freedoms of citizens in the country.

“France reiterates its unwavering opposition to the death penalty everywhere and in all circumstances”, the statement further reads.

In the statement, the French Foreign Ministry emphasized that they remain resolutely committed to the abolition of this unjust, inhumane punishment.

According to Mujahid, the executed man Tajmir, an original resident of Anjil district of Herat Province was executed on the charges of murder and theft.