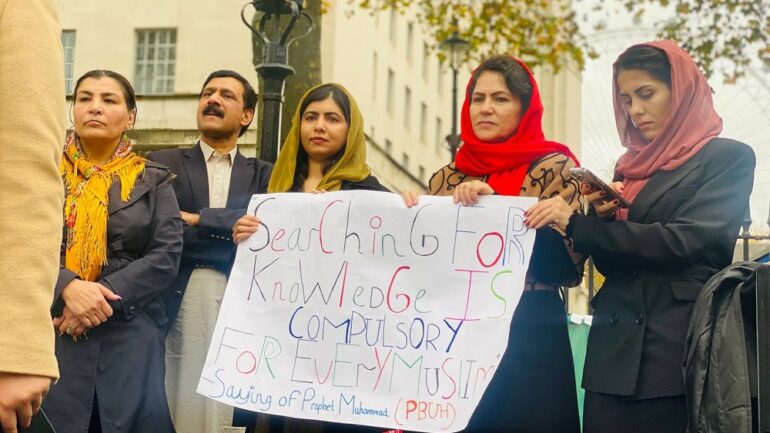 The rally held on Sunday, November 27, specifically called for the release of women rights activists who are under Taliban custody and the opening of secondary schools for girls in Afghanistan.

Some other cities around the world, particularly Washington and Toronto, also witnessed protest rallies in solidarity with the Afghan women protesters.

Moreover, the protesters called for an end to the mysterious murder of women, kangaroo courts against them, and restrictions on women’s rights in Afghanistan.

Talking to Kabul Now, Fawzia Koofi said that the world is silent regarding the ongoing systematic removal of women, the violation of their rights, and the banning women’s public participation in politics and society.

“We specifically call on the UK’s government to prioritize women and human rights in its interaction with the Taliban,” she added.

Another protester named Maryam Mohammadi called on the world not to recognize the Taliban regime.

“The world must have a clear policy towards the Taliban. The money which is sent to Afghanistan in the name of humanitarian aid should be clearly [spent]. Helping a gender-apartheid regime that even does not allow women to have the right to education is a great betrayal against women,” she asserted.

Zamira Kargar, another attendee of the rally, called on the international community and the United Nations to use any means to cease the Taliban’s violence and oppression of women in Afghanistan.

“I call on those governments, which send huge sums of money to the misogynist group, to stop strengthening this cruel regime,” she noted.

Since their return to power, the Taliban have been effectively depriving women of their basic rights to education, movement, and public participation.

Under the ruling group, women are banned from working in government posts and secondary schools are shut for girls.

Such restrictions sparked women’s protests in different cities across Afghanistan. The Taliban, however, have responded violently by arresting, beating, and threatening the women’s rights activists.