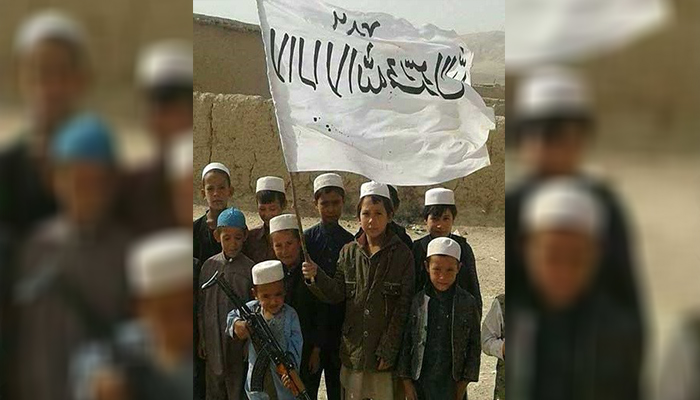 Local residents and security officials confirm that the Taliban militant group has manipulated education curriculum, replacing some subjects with Jihad literature, and recruits children for war from schools operating in their controlled areas.  The group has also imposed a ban on girls’ education in some areas while in some other areas girls are scared to attend school despite the militants have not officially banned it. Rejecting the curriculum manipulation and recruitment of children, the Taliban says they have set up training centers in every province that provides military training for people over 18 years of age.

This comes as more than 200 districts and 10 provinces have fallen to the militants ever since the beginning of the foreign troops withdrawal on May 01. Several other provincial centers are encircled by the militants.

Mangal (pseudonym), who is a resident of Paktia, says that the Taliban have closed girls schools in all nine districts of the eastern province which are under the militants control. According to him, the Taliban have replaced some subjects of schools – which are only open for boys – with Jihadi literature and propaganda. “Only, they have not armed them. They have started propagation for war and Jihad at schools and there are concerns that they may direct the students to military centers and arm them. The Taliban have exclusive military training centers.”

Reports suggest that the Taliban have removed some specific subjects with patriotic contents in some schools in the eastern Paktia province.

Local sources in the northern Takhar province also confirmed that the militants have imposed a ban on girls’ education in the province and manipulated school’s curriculum. The militants had overrun all its districts over the last months and captured its provincial center, Taloqan, earlier this week.

The Taliban have banned girls schooling in some of the districts under their control and have only allowed boys to get education at schools, said Mohammad Yaqub Nazari, a member of Takhar Provincial Council.

In some areas where the Taliban have not imposed restrictions on girls’ education and have not manipulated the school’s curriculum, the students, particularly girls, do not go to schools for they are scared of the Taliban. Some families say that they are feared their girls will be harassed by the militants.

In Malistan district of the southern Ghazni province, the Taliban ask the locals to open their schools after weeks-long battles and when the clashes ended. When Shamsia, 10, goes to her school she faces a very low number of her classmates. Many of the students and their families, especially the girls, are reluctant to attend school for they are scared of the Taliban, said a family member of Shamsia.

The Taliban, however, denies manipulating the curriculum and banning girls’ education in areas under their control.

The schools are operating as in the past in areas under the Taliban control with girls and boys students attending schools without any restriction while observing the Sharia principle, said Zabihullah Mujahid, a Taliban spokesman. He said that the subjects taught at schools are already confirmed by the group and now there is no need to change it. The Taliban spokesman, however, asserted that they will likely bring some changes in education curriculum once they establish their government.

At odds with Mujahid’s response, some local sources in the north and eastern provinces claim that in addition to imposing restrictions on girls’ education, the group recruits school children for war by propagating their “Jihadi” literature in boys’ schools.

The Taliban are using religious schools, seminaries, for recruitment purposes in the northern provinces, according to Mohammad Yaqub Nazari, a member of Takhar Provincial Council. He added that the Taliban have already recruited those seminary students who are above the age 15 and sent them to the battlefields against the Afghan defense and security forces.

Some social media users and journalists have also cited locals sources saying that the Taliban have recruited young people and school students above the age of 18 in Takhar province.

The Ministry of Education does not have details on how many students, particularly girls, have been deprived of education as a result of the recent violence waged across the country. It is also not aware that how many seminaries are operating in Taliban-controlled areas. The ministry, however, has told the media that a total of 176 schools have been destroyed as a result of the war over the past months.

In a statement the UNICEF released on August 09, 2021, it expressed its “deep” concern regarding recruitment of the children by the armed groups and children’s increasing causalities in the Afghan conflict. “Many other boys and girls are deeply traumatized as they witness atrocities committed against their families and others in their communities,” the statement added.

Rejecting accusations of children recruitment, manipulating education curriculum, and ban on girls’ education, the Taliban spokesman said that the group has established 1-3 military training centers in every province where they recruit people above the age of 20 and train them for war. Mujahid added that the children are not allowed to be enrolled at these centers.

Ajmal Omar Shinwari, spokesperson for the Afghan Armed Forces, meanwhile, rejects it saying that the Taliban do not have any military training center in Afghanistan.