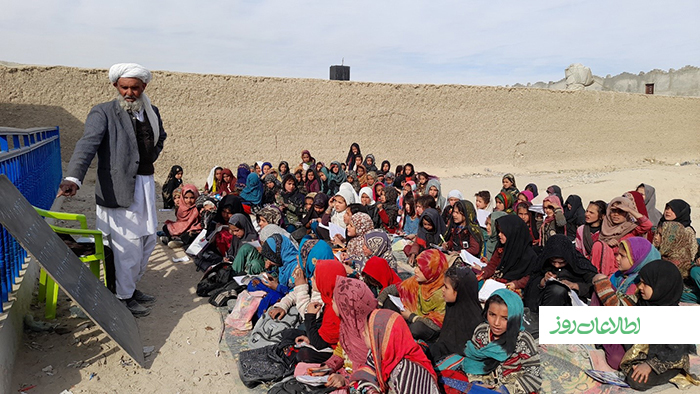 In a spacious dim room of Spin Boldak municipality tribal elders, religious leaders, young students, and government workers had come together to discuss education, security, and other community issues. But no woman was present in the room. Spin Boldak is a border town in the southern province of Kandahar.

The majority of girls in Spin Boldak do not get a chance to finish primary school. A large number of them are wedded off when they are as young as 14. Some are married to elderly rich men, in exchange for a large sum of money. “He who has two daughters is affluent,” said a man in a loud voice. But a young man, apparently disagreeing with the saying of the previous speaker, said he had wedded off 11 of his daughters but received no more than 300,000 Pakistani rupias as gala, a bride price paid by a son-in-law or his family to the family of the daughter-in-law. In the meeting, another man recalled a scene in which a young female teacher was hit hard in the head in daylight for she was teaching at a school.

Women education in most remote tribal town is a real challenge in Afghanistan. But the cultural milieu in the southern part of the country is stricter when it comes to girl’s education. For a long time, some powerful tribal elders and family leaders have resisted women’s rights to education and work, labeling it as a product of Western culture and thought.

Mohammad Wais Tokhi, a government employee, is campaigning for women’s rights to education in Spin Boldak. To break the ice of a man-dominated mentality, he takes his wife to school every morning and accompanies her back in the afternoon. He says that most families in Spin Boldak prefer to educate their boys rather than daughters. Obstacle ahead of girl’s education, as Mr. Tokhi says, is huge and some families do not feel secure to admit their daughters in school.

During their rule, the Taliban shut girl’s schools in many parts of the country. In some areas, the girls were allowed to attend school just up to sixth grade. With the Taliban being ousted from power in 2001, girls’ schools were reopened across the country and enthusiastic families started to educate their daughters. Much has changed in the country ever since Taliban rule but the status of women has changed very little in the lumpy town of Spin Boldak.

“People give no value to female education in Spin Boldak,” said a lucky female student who was allowed by her family to attend high school. A large number of girls wish to attend school and get education but their fathers and brothers resist the idea of female education and do not permit them to get an education, said the twelfth grader who talked to Kabul Now.

The drop-out ratio of female students is high in Spin Boldak.

Sayed Mohammad Seddiq, a teacher in Spin Boldak, says a large number of female students, under pressure by family, leave school before graduating from high school. He says most families do not allow their daughters to attend school when they reach puberty age.

Spin Boldak is one of Afghanistan’s busy and populated border town. There are just 50 schools with one all-girl school.

In the whole town, 17 girls graduated from high school last year but none participated in Kankor – the country’s nationwide university entrance exam, says Nazar Mohammad Samimi, spokesman for Kandahar Directorate of Education. He said the total number of kankor takers reached 138, in the previous year. “Sending girls to school is a shameful act in Spin Boldak,” Mr. Samimi said. He says that the level of awareness about the importance of education is very low and most families see schooling as a path that misguides their children.

Girls who attend school in this windy commercial town go through a tiringly difficult experience. Not many men are secure enough to see girls attending school in the town.

Hashema, a student at Abdul Karim School, says on her way to school swaggering boys make her subject of mockery. Some people in her neighborhood, she says, reproach her parents for sending Hashema to school.

The challenges have made Hashema and her classmates stronger. She is confident enough to cope with the daily difficulty she has to endure in her journey to become a specialist in the future. “I want to become a doctor,” she said with marked confidence. Hashema acknowledges that she would not dream of a bright future if her dedicated school’s headmaster did not encourage her and her fellows. “No one, even the president has served us at Mr. Safa’s capacity,” she said, feeling proud of her school’s headmaster.

Saadullah Safa, a Persian-speaking teacher in a predominantly Pashtu-speaking town, heads Abdul Karim High School in Vesh area of Boldak district. In 2011, Safa volunteered his capacity and house to teach children. To encourage people, he started to reach out to his close relatives to allow their children to attend school. Many of his relations supported his idea, allowing their sons and daughters to attend the school he is running. Safa, now 69, continued to educate Spin Boldak boys and girls though on an occasion he was indirectly threatened by the Taliban to close the education center.

Now, as many as 645 girls study in the morning shift and 650 boys study in the afternoon shift in the old mud-made house that belongs to Saadullah Safa, known as Abdul Karim School.

Sakina Mehdiyar is one among 13 female teachers who teaches mathematics in Spin Boldak. Sakina, who originally comes from the central Bamyan province, says awareness about the significance of education is “very low” in Spin Boldak. “I have come all the way from Bamyan to work alongside teachers and serve Spin Boldak people,” she said.

As a passionate math teacher, Sakina enjoys teaching children in this predominately masculine town but she finds it difficult to wear a burqa in the hot long days of summer in Spin Boldak.

“Students learn for free. After the government stopped sending salary of short-term appointed teachers, I asked them to work as a volunteer or leave teaching,” Mr. Safa explained. He persuaded his 13 high school graduates to voluntarily teach in Abdul Karim School.

A few months ago, President Ashraf Ghani decreed the country’s education ministry to terminate contracts of all short-term appointed teachers. The president’s decree left Mr. Safa and his colleagues in a hard time. The spokesperson for Kandahar Education Director says that education authorities have been working on a plan to bring reform in the president’s decree.

This story has been developed by Etilaat Roz’s Abdul Wahid Haidari and translated into English by Fatema Hosseini.