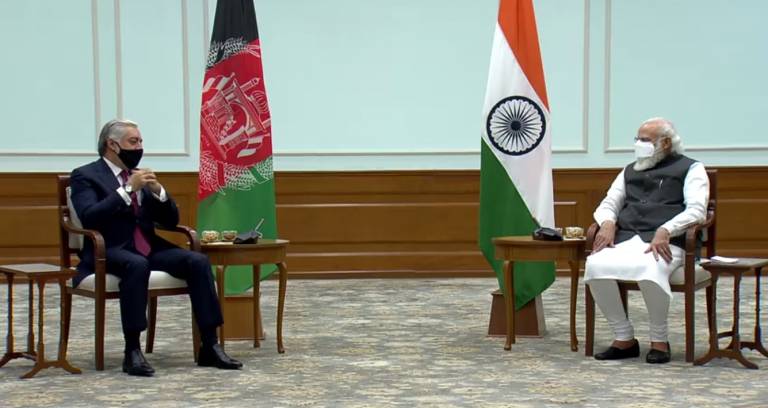 In meeting with Abdullah Abdullah, chairman of Afghanistan High Council for National Reconciliation (HCNR), Narendra Modi, Prime Minister of India, has said that his country supports any peace settlement which would be acceptable to Afghan people.

According to the statement issued by the HCNR office, the meeting was held earlier this morning, Thursday, October 08. Both sides discussed latest developments in the Afghan peace process, ongoing intra-Afghan talks in Doha, and India’s support for the peace efforts in Afghanistan.

“HE PM assured me of India’s continuous support for the peace process, & Afghanistan. I thanked him & the people of India for the invitation, & generous hospitality. I also thanked India for its principled position on the Afghan peace process,” Abdullah wrote on his twitter.

Abdullah left Kabul for New Delhi on a four-day visit aimed at securing regional consensus and support for the ongoing peace process in Afghanistan.

He met Indian National Security Adviser (NSA), Ajit Doval, yesterday, Wednesday, October 07, and discussed the peace process and the Doha talks. “He further stated that his country is in favor of an independent, democratic, sovereign & peaceful Afghanistan, where no terrorists can operate,” Abdullah quoted the Indian NSA as saying.

Few days before his trip to India, Abdullah had a three-day-visit to Islamabad. While accompanied by a high-level delegation, Abdullah received an unprecedented warm welcome in Islamabad and met with high-level Pakistan’s civil and military officials, including the country’s Prime Minister Imran Khan.

Though peace efforts are getting momentum, negotiators of the Islamic Republic of Afghanistan and the Taliban have become bogged down in setting procedure and principles for substantive negotiations since nearly three weeks ago in Doha.

The intra-Afghan negotiations kicked off on September 12, after the Afghan government released 5,000 Taliban prisoners in exchange with 1000 plus Afghan security forces who were held by prisoners by the Taliban.