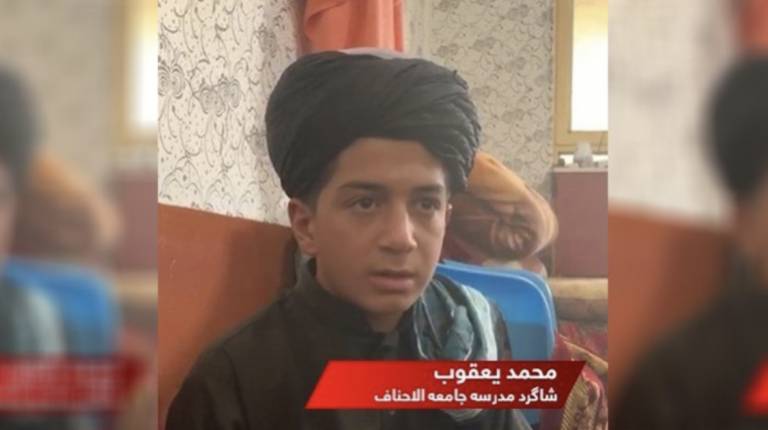 As many as 55 unregistered madrassas are operating in seven northern districts of the Kabul province with each of them being publicly guarded by 1-7 illegal armed men, according to Payk Investigative Journalism Center. The seven districts are namely Mir Bacha Kot, Shakardara, Qarabagh, Kalakan, Istalif, Farza, and Guldara which connect the capital Kabul with northern Afghanistan. Inter alia, Qarabagh and Shakardara have encompassed most of the illegal madrassas.

According to local sources cited by the investigative journalism center, every district has 2-20 unregistered madrassas with each of them providing religious studies – based on their own developed curricula – for 150 to 200 students aged 7-25 years old. Most of the students are from other provinces, living in dorms, and paid monthly stipend by the seminaries whose source of income are not clear. Most importantly, the madrassas are accused of having foreign sponsors, according to local security officials and maintain close ties with the Taliban and Islamic State Khurasan Province (ISKP).

A lecturer of a private madrassa, Jame al-Islamia, which is operating in Qarabagh district, says that teaching Quran does not need official permit and registration, adding that they do not have any other activity but teaching Quran and religious books. He went on to claim that their curricula was more updated and complete than the government’s curricula for madrassas which has encouraged students pursuing their studies in private madrassas.

The Ministry of Education, however, described a sample of the curricula taught in one of those seminaries as ‘incorrect’ reiterating that any educational center which operated without the Ministry’s permit is illegal.

Most of the authorities at seminaries refused to talk to Payk’s reporter. They prohibited students and teachers of the seminaries from talking to journalists. For instance, head of Sayedana Osman bin Affan madrassa in Qarabagh started to beat a teacher of the madrassa as he caught the teacher talking to reporter. In addition to insult, he did not allow the reporter to take video footages.

Located in Shakardara district, Jame al-Ahnaf is another madrassa where at least 200 student aged between 7-20 years old are studying. Mufti Mohammad Naaman, head of the madrassa, says that they have been teaching Quran and other religious subjects for the last 10 plus years. Regarding the armed men guarding the madrassa’s gate, he said that they were there to ensure security of the seminary for they have been threatened by the ISKP. He, however, avoided to provide details on the source and official permit of the guns used by the madrassa’s armed men.

Meanwhile, spokesperson for the Ministry of Interior, said that the madrassas were not granted permit to carry any kind of weapon.

Shah Rasool Fayeq, former district governor of Shakardara, said that most of armed men belonging to these madrassas are holding unlicensed arms and occasionally disrupts local security by conducting armed attacks and distributing pamphlets (Shabnamas). According to the former local official, the local authorities and security forces are not capable of monitoring the madrassas and preventing their armed activities. “There is not any oversight and control over operation of these madrassas.” A local security source in Qarabagh district, on condition of anonymity, said intelligence shows that armed men of these madrassas were affiliated with the Taliban and ISKP. Officials of the seminaries, however, rejected the claim.

Admitting increased terrorist activities in some districts of Kabul province, the interior ministry reiterated that security threats have decreased in the areas after a military operation was launched across the districts.

Some local residents and MPs, meanwhile, believe that the security threats are still in place and security forces are incapable of ensuring security. Fawzia Malikyar, an MP who represents Kabul in the Parliament, said that some young and unknown men were also stationed in these madrassas. In addition to indoctrinating children towards extremism and violence, the young and unknown men are occasionally committing some terrorist activities as well.

Noorullah, who is a resident of Shakardara, said that the Taliban have asked them to abandon their homes as soon as possible via pamphlets distributed in the area. Noorullah, as he claimed, is an ordinary worker who does not hold any governmental post. “Several families of our relative have left their homes and moved to Kabul [city] due to those Taliban threats and pamphlets. We will move too,” the local resident claimed.

Officials at the Ministry of Hajj and Religious Affairs, meanwhile, say that nearly 5,000 madrassas and Darul Huffazes are registered with the Ministry from across Afghanistan. Out of these 5,000 religious learning centers, only 368 madrassas and Darul Huffazes have received work permits from the Ministry and the remaining centers are operating illegally. Furthermore, MP Zabihullah Atiq, a member of the Parliament’s commission on cultural and religious affairs, estimated the total number of unregistered madrassas even more than 10,000 across the country.

Though officials of some unregistered madrassas claimed that they cannot afford to gain official permit for economic reason, the Ministry of Education said that the madrassas are not willing to operate under the Ministry’s umbrella for having illegal arms and armed men, having covert financial resources and tax evasion, and for not pursuing the curricula developed by the education ministry.

Talking to Payk, some students, teachers, and heads of the unregistered madrassas expressed opposition against freedom of expression, human rights, women freedom, and even inclusion of mothers’ names in national ID cards.