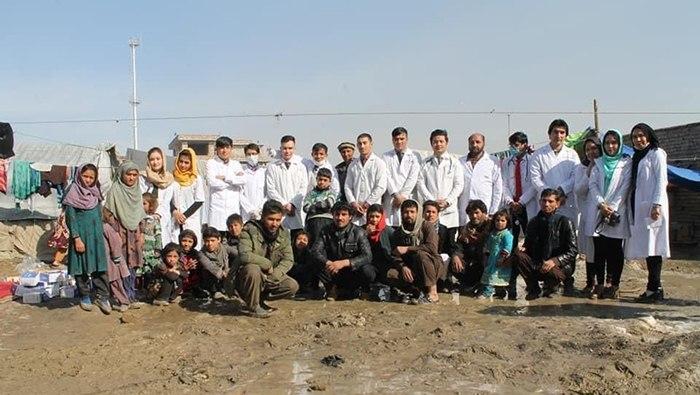 Members of Daricha-e-Sehath posing for a group photo with community members
KabulNow·September 23, 2020

Daricha-e-Sehath is volunteering in public health

“Since the start of my activity at Daricha-e-Sehath, I have witnessed people in painful condition; they neither have access to public health services nor they can afford to cover their health expenses in private medical centers,” says Qudratullah Shams, a final year student of Kabul Medical University, who is a member of Daricha-e-Sehath, a non-profit healthcare group.

Shams, 25, joined Daricha-e-Sehath two years ago, after his first meeting with Shoaib Shaban, the founding member of Daricha-e-Sehath. Shams says working with people closely makes one understand the circumstances and situation they live in.

Daricha-e-Sehath was established in 2017 in Kabul. Nearly 60 volunteers who include physicians, nurses, and health professionals, joined Daricha-e-Sehath healthcare group. The group have provided basic healthcare services to communities—an estimated 5,000 families— in Kabul, Bamyan and Maidan Wardak.

Najibullah Sayaf, 27, a co-founder of Daricha-e-Sehath, says that he lost his mother when he was two years old, and his father at 19. Mr. Sayaf, who has experienced a tough life in exile in 1990s, says that his father passed away struggling with cancer for years. His family, Sayaf says, was unable to cover medicines his father needed to take while they were in Pakistan, coping with difficulties of day-to-day life. In 2001, upon his return to his native country, Sayaf chose to study in medical at a private university in Kabul. [As a child], I experienced poverty, I feel the circumstances a poor family is going through. I have decided to help them within my capability, he says.

Afghanistan’s health infrastructure is grappling with a number of shortcomings and challenges. Healthcare services in the country—particularly in rural areas—are poor, and many isolated villages in mountainous provinces of the country do not have access to basic health service.

Ayesha Bahrami, 41, who is a volunteer at the Daricha-e-Sehath, says she has joined Daricha-e-Sehath to do the least for her people. At age 13, Ms. Ayesha got married. As the Taliban took control over the country, her family migrated to Iran where she attended a refugee-run school which were for Afghan migrants in Iran. Upon her comeback, she continued to complete her high school in Herat and later she chose to study nursing at a private institute. “To have a nursing home is my dream,” she says.

“We want to have a health center and an ambulance in the future,” a member of Daricha-e-Sehath says.