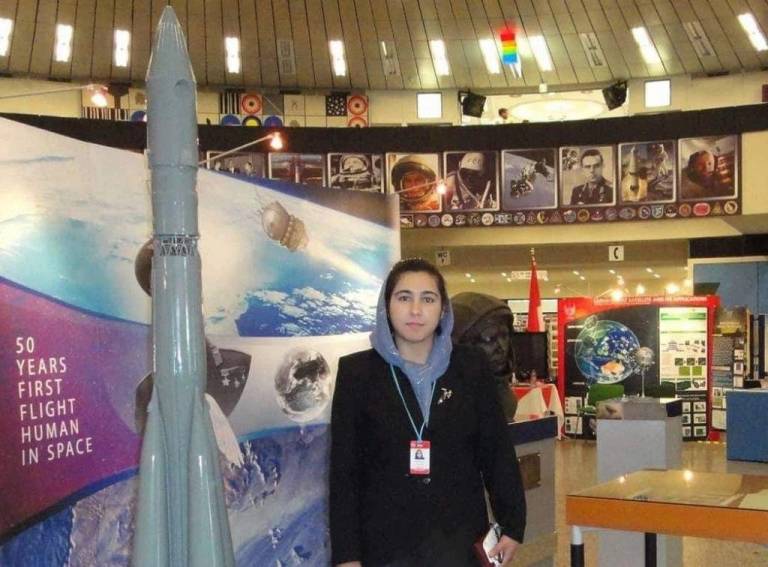 Born in 1984 in Khoshal Khan area of Kabul, Mursal Manati has come a long way to have earned her current social status. She is serving as the head of nutrition department at the Ministry of Public Health.

With the rise of the Taliban in 1990s, her family fled Kabul for Pakistan. Her family sought a refuge in Karachi, Pakistan’s port city of metropolis. In Karachi, life was difficult for this Afghan family. Abdul Hamid, Mursal’s father, who had worked as an engineer in the Afghan Ministry of Mines and Petroleum (MoMP), found it hard to work as worker under Pakistanis. He would repeatedly say, “nowhere feels like home.” Zakia, Mursal mother, who was a teacher of Persian literature in Kabul, found life in Karachi difficult.

Having lived a year of difficult life in Karachi, the Hamid family returns to Kabul, Afghanistan. Abdul Hamid found that his position at the MoMP was occupied by an 18-year-old Talib. Mr. Hamid makes attempt to re-secure his position at the Ministry but this time he has to work under the 18-old inexperienced Talib—something very difficult for the proud Afghan engineer who thinks his right is violated. He finally resolves to quit government job forever.

“The repression of the Taliban period was suffocating.”

Though the Taliban regime had placed a restrictive oppressing rule over Kabul and areas-under their control, Zakia and Abdul Hamid made a new life. Zakia started teaching her children, giving them books to read. Fiction and novels gave Mursal a refuge. She read as many novels as she could find. Amir Ashiri, Parwiz Ghazi, Ivan Turgenev, Fyodor Dostoevsky, Leo Tolstoy, and Honore de Balzac were the authors who she read. “By then, I didn’t have much opportunities and freedom to go outside and play; we were confined at home. So we started reading books at home.”

Mursal was inspired by one of Turgenev’s novels, Fathers and Sons, which is about a physician who works hard for days and nights to study plants and uses it for treating a contagious and deadly disease. This character inspired her to have an interest in medicine and pharmacy.

Mursal was enrolled in an English language center which taught secretly in a basement.

Few months before collapse of the Taliban, Mursal experienced the most horrific of what she now calls Taliban’s brutal treatment of Afghan women. One day, on her way back home from institute, she, wearing jeans and high-heeled shows, was stopped by a group of Taliban militants, who called her “Angriz” meaning “foreigner”. She reacts to Taliban, saying “you are foreigner.”

The Taliban attack her and whip her.

“The repression of the Taliban period was suffocating,” says Mursal.

Under their rule, the Taliban treated people inhumanly. They would force men to keep long beard and restrict women movement in the city. Under Taliban, a woman was not allowed to come outside her house unless accompanied by a man relative. Women were forced to wear burqa.

In spring 2002, Mursal passed exams for seventh and eighth grade at the Ministry of Education. After graduating from Abul Qasem Ferdousi School in 2005, she passed Kankur exam, university entrance exam, and got admission at the Faculty of Pharmacy, Kabul University. In her last year at the university, she did an internship at Andhra Gandhi Children’s Hospital, where she nursed sick children who were mostly malnourished. This gave a new idea to Mursal which was to pursue her master degree in nutrition.

In summer 2010, after graduating from university, with insistence of her parents, Mursal got a temporary job at Afghan Nuclear Energy Agency (NEA).

After several weeks of working, she was promoted at the specialized department of the agency from the procurement department. Working at the Ministry, she soon realized public institutions were marred with corruption and nepotism.

Working for half-an-year at the Ministry, Mursal received a master’s scholarship in India.

The warm and humid temperature of Putnam, study pressure, and separation from her family weren’t easy for Mursal. But she stayed strong and only after completion of her degree in spring of 2013, she returned to her country with a master’s degree in nutrition science.

Lack of job opportunities in her field of studies, however, forced her to join NEA as chief specialist. After six years of working there, in December 2019, she eventually succeeded in getting hired as the head of nutrition department at Ministry of Public Health. “Many people, friends, and relatives didn’t understand the major I studied for my master program,” says Mursal. The number of people studying nutrition as their master or Phd are nearly seven, which is very few. Mursal believes that treatment of patients by prescribing proper nutrition is more important and efficient than prescribing medicines.

Although the number of nutritionists in Afghanistan is very small, the department of nutrition, in cooperation with international organizations in Afghanistan, conducts short and intensive nutrition education programs for nurses and health workers in the health sector each year, says Mursal.

She consider herself as a responsible person for implementing two strategic and long-term health programs in the field of health and nutrition. These programs include, establishing a nutrition department in all hospitals of the country and treating children with their mothers by the country’s traditional food diet. “If the patient would be treated by medicine but if a proper diet is not prescribed to prevent the health consequences of the prescribed drugs and to prevent the patient from becoming malnourished, serious and major damage to public health will occur.”

Mursal says she dedicates her career to achieve her mission—achieve these two goals and reduce malnutrition rate in Afghanistan.