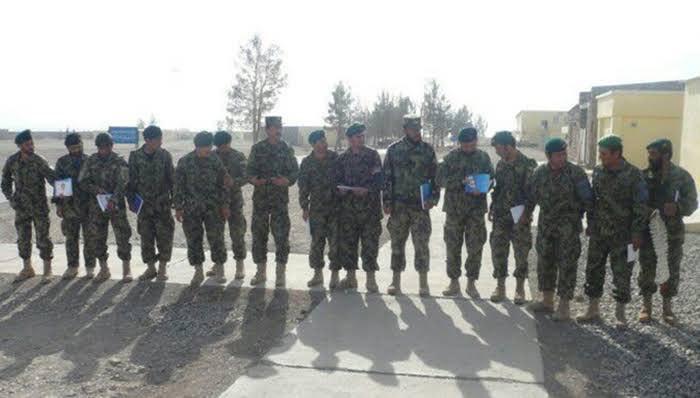 In 2005 a small group of 26 cadets, who then were under training at the Marshal Fahim Military College in Kabul, resolved to find a philanthropy box for the families of fallen Afghan soldiers. They realized that families of fallen soldiers were the most vulnerable members of Afghan society.

The 43-year-old Mohammad Husseini, who is an initiator of the philanthropy box, says, “After my graduation, I decided to continue giving and support some families.”

In December 2002, under the Afghan Ministry of Defense, the National Afghan Army (ANA) was established. Largely funded by the United States and its NATO allies, the ANA was trained to defend country’s national sovereignty and fight against the militant groups that were jeopardizing national security of Afghanistan.

Majority of military students came from a poor financial backgrounds—mostly from broken families. The group of 25 cadets got along with each other very soon. An almost similar background coupled with common purpose of defending the Afghan soil tightened human bonds among them and created mutual trust. They would often lend money to each other.

After graduation, the 26 newly trained Afghan soldiers were deployed to different corps in different provinces of the country. In the first month, they donated nearly 300,000 afghanis for philanthropy box aimed at providing families of the fallen Afghan forces with financial assistance.

They kept donating and giving.

In 2013, General Mahiuddin Ghori, who then was the chief of staff at Zafar National Army Corps in Herat and General Nematullah Khalil, who then was the head of Farah 2nd Brigade, joined the group of 26 Afghan soldiers.

But the two generals did not live long.

The bloody Afghan conflict has taken thousands of young lives, particularly from Afghan defense and security forces. Last year, President Ashraf Ghani, while addressing a panel at the World Economic Forum, said that more than 45,000 Afghan security forces had lost their lives since 2014. But former Afghan spy chief, Rahmatullah Nabil, who was running for the 2019 presidential elections, contradicted the figure, saying that nearly 60,000 Afghan soldiers had lost their lives over last five years.

Under a philanthropy box named Dil-ba-Mehrabanam, literally means ‘kind hearts’, now the six members of the group who have survived continue to collect donation for families of the fallen Afghan soldiers. They support nearly 400 families in Herat, providing them legal services and supplying small packages of food for them. Out of these 400 families, 188 are victims’ families, 30 are families of disabled soldiers, and the rest of poor families are introduced by the army members. Schooling of children of the security forces is one of the long-term goals of this organization. Currently, 15 students are supported by offering them mentorship program and providing them their studies’ materials.

In 2015, Husseini lost his feet in a mine explosion. He is now retired. “I have lost most of my close friends in conflicts. The political situation is disappointing, I am still hoping for a better tomorrow,” says Husseini.

The Afghan National Army has paid a heavy human price in the last 19 years. It has lost thousands of young lives to protect the stability of the Afghan government. But the government has paid little attention to families of the fallen soldiers who lost their lives to protect national sovereignty of Afghanistan.