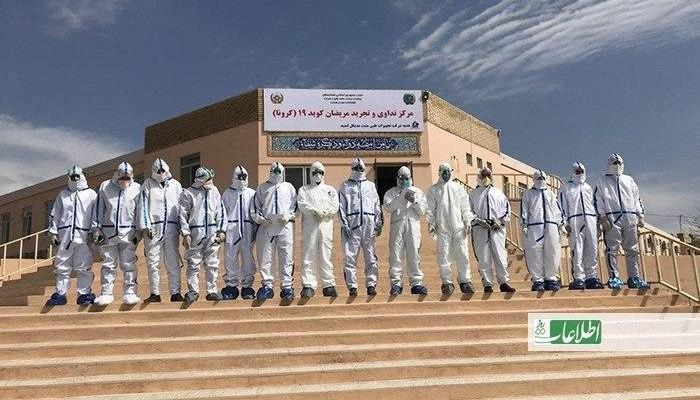 As the pandemic coronavirus continues to spread across the country, health authorities in the western and hardest-hit city of Herat confirmed to Kabul Now that 41 health workers have been infected by the pandemic disease.

In another case, a physician, working with a private hospital in Kabul, passed away on Monday, April 06. His colleagues were quarantined after the health authorities confirmed that his death was caused by the virus.

Mohammad Rafiq Sherzai, spokesman for Herat Public Health Department, told Kabul Now that most of the infected health workers were isolated and that their health condition was better now.

Wahidullah Mayar, spokesperson for the Ministry of Public Health, said today, April 06, that so far 11 infected patients have died in Kabul, Herat, Balkh, Daikundi, and Takhar provinces. According to the health officials, 18 patients, who have recovered, were discharged from hospital in Herat, Kabul, Samangan, Kapisa, Kandahar, Nimroz, Farah, Badghis, and Logar provinces.

Afghanistan’s health sector is running short of required facilities to test the returnees who come from Iran and Pakistan on daily basis. Many returnees who have no choice but to come back home enter the country untested.

The latest official record shows that 367 people have tested positive for Covid-19 and 11 patients, infected by the virus, have passed away throughout the country, but the actual number of infected cases is far more than official figures announced by the country’s health authorities.

This comes while the Ministry of Refugees and Repatriation recently said that around 150,000 returnees have come back to Afghanistan from Iran over past two months. Though the western Herat province, with 230 positive cases of the Covid-19, is the hardest hit and more vulnerable to the pandemic for adjacency to Iran, most returnees are from central highlands of Afghanistan.

So far, four people have tested positive for Covid-19 in the central Daikundi province, and a 65 year-old woman has lost her life after being infected by the virus. Provoked by recent outbreaks of the virus, Afghans social media users, launched a nationwide campaign, lashing at the government for turning a blind eye on the central regions. They asked the authorities to facilitate public awareness campaigns, supply medical equipment—inter alia, testing kits and face masks—and establish testing laboratories in Daikundi or Bamyan to prevent outbreak of Covid-19 in the central regions.

In addition to the uncontainable influx of returnees from Iran and Pakistan, 3 to 4 airplanes bringing passengers home from foreign countries land in Hamid Karzai International Airport on daily basis, according to staffs working at the airport. So far, two airport staffs have tested positive for the pandemic.

Mokhtar Ahmad, an airport staff, criticizes that the doctors assigned at the airport failed to diagnose his disease infected by the virus on time even though symptoms were clear. “I was severely sick for several days. Got suspicious about myself of being infected with corona [virus]. The doctors assured me of not being infected by corona after checking up my fever. Then the police hospital prescribed me some medicines. My illness got severe another day at home and went to Afghan-Japan hospital. They called me 48 hours later and confirmed my infection with the corona virus,” he told Kabul Now, confirming that his sister was also infected now with the virus.

Rahman, an alias name, is another airport staff who reveals that he and his personnel are not supplied with the needed materials to be protected against the virus. “We have face masks and gloves for some days but not for some other days. The gloves, sanitizers, and special dress are not supplied until we do not request it,” he added.

He said that the health instructions are not followed properly due to huge workload on staffs.

Two foreign diplomats who according to the Ministry of Public Health tested positive for the Covid-19, were allowed to make free movements at the airport.

“They (the two diplomats) were checked up at Kabul airport and we allowed them to pass [the check line] after being assured [by the checkup team] of them not having the corona [virus],” Rahman further said.

Many rural communities in far-reaching villages across the 34 provinces have reportedly resorted to mass prayers, traditional gatherings, and slaughtering sheep in order to prevent the outbreak of the pandemic disease.

The pandemic coronavirus continues to spread in Afghanistan while the country is locked in a squabbling political crisis. Government strategy to place the capital Kabul and western city of Herat under lockdown has failed to work as a large number of families in these cities live on daily wages they make. The country will face a human catastrophe if risk management measures are not taken on time.