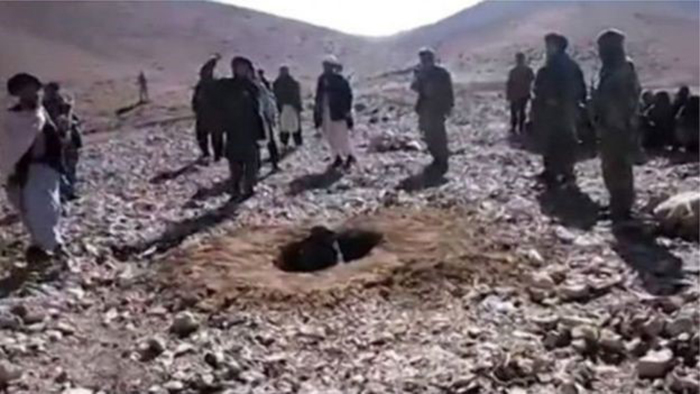 Ghor: Increase in brutal cases of violence against women

Two women have recently been killed in a brutal way in the central Ghor province, says MP Roqia Nayel who represents the province in the Afghan parliament. According to her, a woman was tied to a horse, and killed after receiving a death sentence in a Kangaroo court held in Charsada district of the province.

She further detailed that the victim was a resident of Lal wa Sarjangal district and was murdered for running away from home.

In a second case, the MP says that a woman was killed by her husband who stabbed her 70 times two months ago. “Such cases of violence against women remain often under-reported,” Mrs. Nayel stated.

“It was a terrible incident. According to doctors, they had found 140 wounds on Zahra’s body,” the MP told Kabul Now, adding that she has personally gone to the area and collected information about the case. As she states, the brutal cases of violence against women frequently occurs in Ghor province.

In addition to kangaroo courts, rape, forced marriage, child marriage, and physical assaults against women and girls are other types of violence that the women faces in the province.

Lal wa Sarjangal is relatively a secure district in Ghor which has witnessed significant increase in cases of violence against women. The occurrence of such incidents remains highly underreported in eight districts of the province where the Taliban and illegal armed groups have been reportedly active and enforce their own types of jurisdiction.

Halima Parastesh, who is director of women affairs department in Ghor province, says that they have registered 113 cases of violence against women, including 11 acute cases.

Last year, 123 cases of violence against women were registered in the province.

The Ministry of Women Affairs, as Ms. Parastesh states, has only access to the provincial capital, Ferozkoh city, Dawlatyar, and Lal wa Sarjangal districts. Therefore, they can only monitor the women rights situation in the capital and the two districts. The remaining territories, with a higher possibility of having more such cases, remain uncovered.

Head of women affairs at the provincial office of Afghanistan Independent Human Rights Commission (AIHRC), Farida Naseri, said that they have just registered 38 cases of violence against women over past year for not having access to most of other district of Ghor province. She added that only four women were murdered in Lal wa Sarjangal district.

“Ghor has become insecure and the Taliban have presence in all districts,” she underlined, adding that they couldn’t cover Lal wa Sarjangal and Dawlatyar districts which were secure over past years.

According the provincial office of the AIHRC, the Taliban had shot death a girl and a boy, both residents of Charsada district, over an alleged case of “running away” from home around five months ago. The AIHRC’s provincial office further notes that they were shot death by armed men while heading from Ghor to Lulash district of Faryab province.

MP Roqia Nayel, however, notes that Kangaroo courts are usually applied against women, not against men. “The women often dies in such courts while these courts are not hidden from government, intelligence agencies, and justice and judicial institutions,” she claimed.

Jamila Karimi, who is women rights activist, argues that existence of kangaroo courts undermines the operation of law enforcement bodies and the country’s justice institutions. “The women often become sacrificed by such courts and the justice remain uninsured,” she adds.