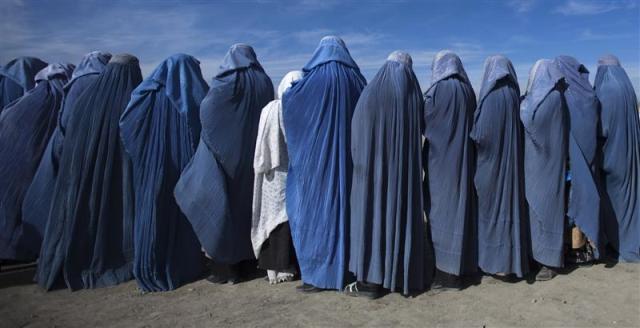 Afghan women line up during a cash for work project in Kabul January 6, 2010
KabulNow·September 14, 2019

In early 2012, Meena, then 21, was forced by her father to marry off a 51-year-old man, who already had two wives—each having three and four children. In the absence of their husband, the two wives beat up Meena out of sheer hatred.

Meena underwent different types of domestic violence: she was being hit by dishes, lashed by wire and wood, and was forced to cut off her relations with her father’s family.

A country with long history of conservatism and patriarchy, Afghanistan is witnessing scores of domestic violence being committed against helpless women despite some promising progresses made after the fall of the Taliban in 2001. In most cases, domestic violence—forced marriage, marriage to settle feud, and child marriage—forces some Afghan women to run away from parents or husbands’ houses.

In mid-2012, Meena, out of patience, escaped from her husband’s house, taking her two children. She returned to the only one she had in the entire world: her father.

My father is treating me harshly, Meena says. “Where is your coward husband, he must divorce you if he cannot provide [your requirement],” Meena quotes her father with a deep pain. “I am tired of this situation.”

Samira Sadat, a social activist, who has repeatedly encountered homeless women in Kabul, talks of a recent one. “I happened to see a woman falling down on the street as I was getting in my friend’s car. I went to help her. She was laying in bad condition. “My name is Fatema, I have come from Iran, I want to go to foreign country,” she said as I asked her, Samira recalled.

“We took her to nearest police office after informing the high-ranking officials at the Ministry of Interior. She had no place to go and no shelter to sleep.”

According to figures published by Afghanistan Independent Human Rights Commission (AIHRC), an average number of 10 women file complaint letters to the AIHRC on daily basis. Although homeless women reserve the right to separate from their husbands in the country’s civil law, most women continue to live in limbo as they are illiterate, unaware of their rights, and cannot access judicial organizations.

Roqia was severely beaten by her husband, Akbar, around one and a half year ago when she gave birth to her first child—a baby girl. As consequence of constant domestic violence, Roqia ultimately found herself forced to seek protection in her father’s house.

“My husband was a drug addicted man, and he wasted all my money and gold (jewelries). We did not have food,” Roqia says about her husband, complaining that Akbar neither wanted to divorce her, nor provided them with shelter. “I’m living in uncertainty and don’t know what will be my and my daughter’s future.”

According to the AIHRC, more than 1,500 homeless women have referred to the commission for advocacy during nine months of the year 2018. The women mostly reside in relatively secure areas where human rights entities, particularly the AIHRC, are easily accessible.

Two years after her marriage, Sohaila was abandoned by her husband, who even did not leave a single clue to be tracked. She has been living with her parents for the last eight years.

“The neighbors tell me he has gone to Australia. I have no address and clue of him,” Sohaila says. She added that the family of her husband hesitates to give her his address or contact number.

Years of war, increasing unemployment, swelling drug abuse and polygamy practices have added to the problem in the country.

Laila Haidari, a social activist, says homeless women are a social reality. “I once encountered a homeless girl named Lailima, who had been physically and psychologically subjected to violence. She was traumatized and repeatedly subjected to violent rape,” Laila said. Lailima was extremely abused by policemen and street vendors, she noted.

There is no government-run-shelter for homeless women in Afghanistan, and throughout the country there are 27 safe houses that are funded by international NGOs. Around 800 women are currently living in these safe houses which are founded to provide temporary shelter for a limited number homeless women.

The Ministry of Women Affairs is the only organization which is responsible to build safe houses in 34 provinces but it has failed to build a single one.

Roya Dadras, spokesperson for the ministry, said the ministry did not have budget to build safe houses.

According to Laila Haidari, the procedure for building safe house for women is too rigid and there are barriers against it.

Roya Dadras, says the ministry has submitted a proposal to the presidential palace. The government has designated a plot for shelter to be built for homeless women, she said.