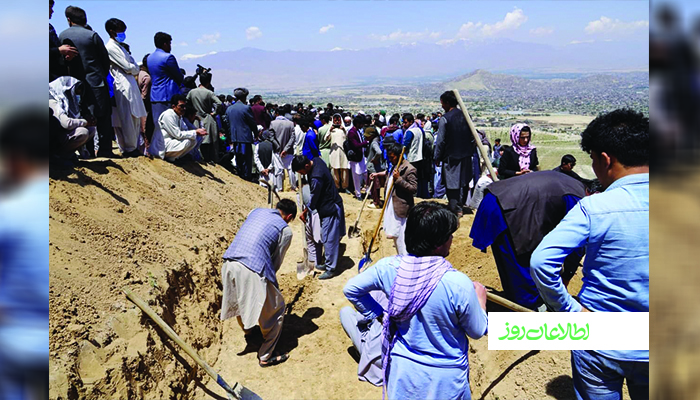 Timeline: killing of Hazaras in Afghanistan

Over the last years, hundreds of ethnic Hazaras have been killed in various suicide bombings, target killings, and hostage-takings by Sunni militant groups in Afghanistan. The Hazaras of Afghanistan, though mainly come from the central highlands of the country, are currently dwelling in Kabul, Ghazni, Herat, Mazar-e-Sharif, Sar-e-Pul, Kunduz, Ghor, Helmand, Urozgan, Badghis, Bamyan, and Daikundi. Kabul Now presents an exclusive timeline of the attacks on Hazaras.

Armed men affiliated with the Taliban militant group stopped a mini-bus in Ferozkoh area of the western Ghor province, took the passengers down, identified 14 ethnic Hazaras including a newlywed couple, and killed them on the spot.

Militants affiliated with the Taliban stopped a bus in the southern Zabul province, took down 31 Hazaras who were on their way from Herat to Kabul. The armed men kidnapped them. Three days later, the militants released one of the 31 hostages who was a Tajik from Ghazni. They beheaded six of the hostages and released the remaining Hazara hostages after Hazara and Pashtun elders mediated.

Armed men stopped cars in Zari district of Balkh province, took down 13 Hazaras, and killed them on the spot.

Militants stopped a car in Zabul province and kidnaped seven ethnic Hazaras including four women and an eight-year-old girl, and took them to Khak-e-Afghan district. Under pressure by Hazaras, the Afghan government conducted a rescue operation to release them but the sworn enemies of the Hazaras beheaded them.

On July 23, 2016, twin bombings targeted a peaceful demonstration rallied by the ethnic Hazaras in the capital Kabul, killed 84, and wounded at least 283 others. The Islamic State Khurasan Province (ISKP) claimed responsibility.

The Taliban militants stopped a car in Ghor and took down five university students who were ethnic Hazaras and tortured to death one of Hazara hostages and released the remaining four of them a week later. The ISKP claimed responsibility for the attack

On October 11, 2016, gunmen, disguised in police uniforms, attacked a religious ceremony in Kart-e-Sakhi neighborhood of Kabul, killing 18 ethnic Hazaras, including women and children, and wounding 58 others.

On October 12, 2016, a roadside bomb planted by the militants targeted Ashura procession in Balkh district of the northern Balkh province, killing 14 ethnic Hazaras and wounding 70 others. ISKP claimed responsibility for the attack.

A suicide bombing targeted Baqer ul-Uloom, a mosque in the Hazara-dominated western neighborhood of Kabul, killing 33 and wounding 64. ISKP claimed responsibility for the attack. But the Afghan security and intelligence agencies blamed the Taliban for the attack.

Three armed men stopped a bus in Tala Wa Barfak district of the northeastern Baghlan province, took down 16 ethnic Hazara miners, lined them, and opened fire at them. Seven of them were killed, four were wounded and five of them managed to escape.

On June 15, 2017, gunmen affiliated with the ISKP broke into al-Zahra mosque in the western area of Kabul and opened fire at worshipers who had gathered to perform a religious ceremony. At least six ethnic Hazaras were killed and ten others were wounded.

On August 01, 2017, a suicide bomber broke into a Shia mosque in western Herat city and detonated his explosives. Following the suicide detonation, another gunman opened fire at worshipers. At least 29 people were killed and 64 wounded in this targeted attack.

On November 20, 2017, a suicide bomber targeted Imam Zaman Mosque, a Shia mosque in Dasht-e-Barchi area of the capital Kabul, killing 30 and wounding 45.

On April 22, 2018, a suicide bomber detonated his explosives at Tazkira registration center in the western neighborhood of Dasht-e-Barchi, killing 69 and wounding 120 ethnic Hazaras who lined up there to register their names for a parliamentary vote.

On August 15, 2018, a suicide bomber targeted Mawoud Educational Center, a tuition center in the Hazara-populated Dasht-e-Barchi killing at least 48 students, aged 10 to 18, and wounding 67. ISKP claimed responsibility for the attack.

On September 05, 2018, twin suicide bombings targeted a wrestling club in Dasht-e-Barchi neighborhood, killing 35 and wounding 95. The majority of the victims were athletes practicing wrestling in the club. The ISKP claimed responsibility for the attack.

On October 27, 2018, the Taliban militants launched attacks to target an anti-Taliban Hazara commander in Urozgan Khas. The clash lasted for several days. According to Amnesty International, 31 Hazara civilians were killed, seven injured, and dozens of Hazara families were displaced. The Taliban expanded their attacks in Malistan district of Ghazni and reportedly killed 11 Hazara civilians in three villages of Malistan.

On March 21, 2019, remote-control bombs killed six ethnic Hazaras and wounded 23 others while they were celebrating Nawroz festivity in Kart-e-Sakhi neighborhood of the capital Kabul. The ISKP claimed responsibility for the attack.

On May 12, three gunmen, disguised in police uniform, broke into an MSF-run maternity hospital in Dasht-e-Barchi and killed 24 ethnic Hazaras including mothers, newborn babies, and hospital staff. The ISKP claimed responsibility for the attack but the Afghan government blamed the Taliban for the carnage.

On October 24, a suicide bomber detonated his explosives at Kawsar-e-Danish, a tuition center in the western Dasht-e-Barchi neighborhood, killing at least 30 students, mostly aged 13 to 16, and wounding 70 others. The ISKP claimed responsibly for the attack.

On November 24, twin blasts killed 14 ethnic Hazaras and wounded 50 others in the main bazaar of Bamyan city. No group claimed responsibility for the attack but two men who were later arrested in connection with the blasts confessed that they were intrigued and paid by the Taliban to place the bombs in Bamyan bazaar.

On March 04, unknown gunmen killed seven Hazara workers in the eastern Nangarhar province. No group claimed responsibility for the killing but local security officials blamed ISKP for it.

On April 21, the Taliban militants gunned down four Hazara civilians in Dawlatyar district of the western Ghor province.

On May 08, a suicide bombing killed 85 Hazara civilians, mostly schoolgirls, and wounded more than 240 Sayed ul-Shuhada high school in Dasht-e-Barchi area. The explosion went off at a time when the teenage schoolgirls were leaving their school. No group claimed responsibility but the government blamed the Taliban for the bombing.

On May 19, the Taliban militants stopped a van in the western Ghor province, took down three Hazara passengers, and shot them dead in Band e Bayn area of Ghor-Herat highway. The slain Hazaras were shopkeepers. The group refused to make any immediate comment.