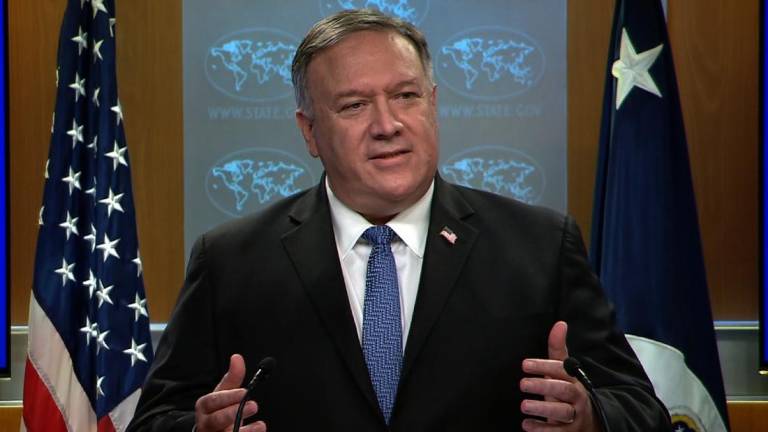 US Secretary of State Mike Pompeo is set to meet negotiation teams of the Afghan government and the Taliban today, November 21, in Doha, capital of Qatar, according to the US Department of State.

As set in a public schedule of his trips to some European and Middle East countries, Pompeo will hold separate meetings with negotiators of the Afghan government and the Taliban representatives late today (around 06:00 PM with government negotiators and around 06:50 PM with Taliban negotiators).

“He will also travel to Qatar to meet with Amir Tamim bin Hamad Al Thani and Deputy Prime Minister and Minister of Foreign Affairs Mohammed bin Abdulrahman Al Thani to discuss bilateral and regional issues, including the importance of Gulf unity,” part of a statement issued by the US Department of State stated.

Pompeo started his ten-day trip to France, Turkey, Georgia, Israel, the United Arab Emirates, Qatar, and Saudi Arabia on November 13 and is set to conclude on it November 23.

Pompeo is supposed to meet negotiation teams of the intra-Afghan peace talks as there has been no development in negotiations between the Afghan government and the Taliban since September 12 – start of the intra Afghan talks.

The two Afghan sides have got bogged down on finalizing a procedure and principles for the intra-Afghan talks which was kicked off on September 12 as part of the US-Taliban agreement signed on February 29.

However, sources from the negotiating teams of the government and the Taliban told Kabul Now late Thursday, November 19, that they were at the threshold of finalizing a procedure and principles for negotiations. The Taliban source added that spokespersons of the two sides will announce it soon.