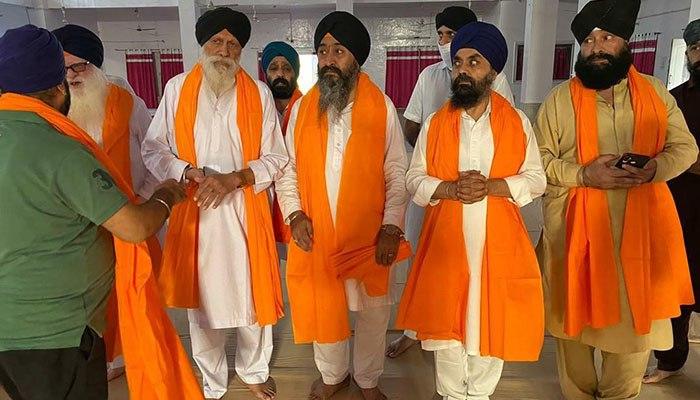 Sikhs and Hindus flee Afghanistan in seek of a peaceful life

As the sun rises in outskirt of New Delhi, Delip Singh walks to a Gurdwara to worship his God. He begins to worship as the spiritual bell of Gurdwara rings but a deep nostalgic memory of his high profile life in Ghazni occupies his mind. This Afghan Sikh asylum seeker is currently enjoying a peaceful life in India despite being homeless and far from his country. Although, he is a jobless person, he is neither worried to be called an infidel who must convert to Islam, nor concerned about safety of his family members, who used to get harassed and threatened on streets of Ghazni province.

Delip Singh, 83, was born in Paktia province during the reign of Zahir Shah. He had spent 65 years of his life in Ghazni province, where 350 Sikh and Hindu families used to live in Shah Mir, Plan-e-Se, Shahr-e-Kohna areas. However, the start of civil war and insecurity in Afghanistan have caused these families to flee their home province. Two months ago, the last Sikh and Hindu family also left Ghazni for India.

Sikh and Hindu population in Afghanistan are mostly busy with trade and selling herbal medicines. Despite staying neutral in politics, they have faced major social challenges and insecurity in their home country. Delip Singh says that their children were always the victims of harassment in public spaces which deprived them to get education at public and private schools. In addition to children, Hindu women were also fearful of getting harassed which led them to barely walk on the street alone, says Mr. Singh.

Since dozens years ago, harassment and life threats became part of life for Afghan Sikhs and Hindus. However, the community’s sufferings doubled in recent years as part of a seemingly targeted killing or even ethnic cleansing conspiracy. 19 people including Uttar Singh Khalsa, a prominent Sikh leader in Afghanistan and a parliamentary candidate with two of his assistants (Raja Singh and Raul Singh), were killed in a suicide attack in Jalalabad, capital city of the eastern Nangarhar province On July 01, 2018. Many prominent figures of the community, including Sample Singh, head of Herat Medical Association, and Arjit Singh in Kabul, became the victims of target killings.

The minority ethnic group suffered harassment, humiliations, and other social insecurities over past decades. After increased targeted killings, particularly following a Sikh temple in Kabul came under a deadly attack on March 25 2020 (25 killed and eight others wounded in the attack), the community found no other option but to leave their motherland for India in seek of a peaceful life. “There is a conspiracy going against us; we are being harassed and killed; we are forced to leave the country in a bid to seek a better future for our children,” says Mr. Singh.

According to a survey conducted by Porsesh Research and Studies Organization (PRSO) on February 2019, the Afghan Sikh and Hindu community started to face discriminations and violence in 1980s.

The study has interviewed 300 Hindus and Sikhs from Ghazni, Nangarhar and Kabul provinces. It has found that 96 percent are always or mostly concerned about their safety and security; 67 percent confirmed that Hindu and Sikh youths face lack of educational facilities and equipment. Humiliation, discrimination, harassment along with unemployment have been cited as major challenges that the community have been going through.

Narender Singh Khalsa, the one and only MP who represents the community in the Afghan Parliament, estimates nearly 350,000 Sikhs and Hindus lived in Afghanistan in 1970s. As he puts it, the population has shrunk to 300 people, who currently reside in Nangarhar and Kabul provinces.

According to him, a large number of Sikh and Hindu population migrated to India, where they have received no aid from the government and have a poor life condition at Dharamsals. “Since they are living a peaceful life, they are happy,” Mr. Khalsa says.

A large number of houses owned by Hindus and Sikhs were forcibly grabbed by people of other ethnicities. “A thousand houses have been left in Kandahar… the properties which are not sold out in Kabul and Nangarhar, and other provinces are grabbed by people,” he added.

Though Mr. Khalsa has raised the issue of the land grabbing to Afghanistan office of National Security Council, Parliament, and to the media but to no avail. “It’s over now. There are only 300 people left [in Afghanistan] who [the government] cannot afford to protect them.”

Despite longtime sufferings Afghan Hindu and Sikhs underwent so far, they are still patriotic and think of a peaceful Afghanistan where they might be able to return. But Mr. Khalsa expressed strong pessimism about bringing a sustainable peace to the country. “Afghanistan is my motherland, where I was born and raised. If there would be a durable peace, we will come back. But I am hopeless regarding bringing about peace in the country,” he continued.

The start of Sikhs’ presence in Afghanistan dates back to 16th century, when Baba Nanak, founder of Sikh religion, visited the country.

Dr. Farooq Ansari, head of Ethnography Department at Afghan Academy of Sciences, believes that historically, Sikhism is one of the most recent religions, founded in 15th century in Punjab region of the Indian subcontinent by Baba Nanak (the religion’s first guide). In Sikhism, Baba Nanak combined the good values ​​of Hinduism and Islam, and that monotheism, human equality, the struggle for social justice, honesty are among the basic beliefs of this religion.

Mr. Ansari explains that one of the influence of Sikhs and Hindus in Afghanistan, especially in Kabul, is names of the areas that are still kept after their gods. Shivaki, a neighborhood in southern Kabul, as Ansari denotes, is derived from the name “Shiva”, which is the god of the sky and the most important deity of Hindus. Another area in Kabul is called “Andraki”, which is named after “Andra”, god of weather and Hindu seasons. In Hindu texts and beliefs, the Lahogard River – Logar River today – is so important and is as sacred as Ganges River to Hindus.

According to Mr. Ansari, rivalries between India and Pakistan after the division of the Indian subcontinent and growth of religious extremism have forced large numbers of Afghan Sikhs and Hindus to migrate to other countries. “Even their agricultural lands, temples, homes have been grabbed.”