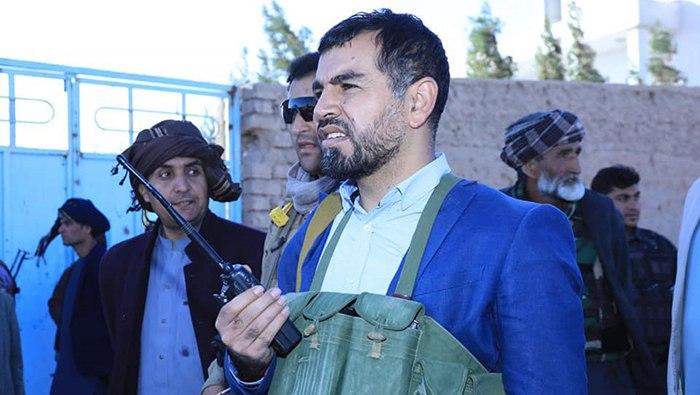 A growing insecurity with signs indicating the Taliban are equipped with advanced weapons provided by a ‘neighboring country’ has forced governor of the western Herat province, Sayed Wahid Qetali, to step in battle against the militants. According to the governor, eight districts of the province are currently plunged in war with the Taliban.

Though the Taliban wanted to topple Farsi, Karukh, and Ghoryan districts, they failed to even make progress for a few meters, Herat governor, Qetali stated. “There are 300 fighters from the enemy but only 13 police forces in one district. We fought with this number of government forces against the Taliban,” Qetali claimed.

Though Afghan defense and security officials have repeatedly promised to increase the number of Afghan security and defense forces in the province, the promises have yet to be met. “We urge the government to increase Tashkil (number) of police forces in order to ensure security of Herat. Some provinces have small geography but have many government forces. The government must increase tashkil (number) of police forces and operatives of the National Directorate of Security,” said Wakil Ahmad Karukhi, a member of Herat provincial council.

Taliban are equipped with advanced weapons

According to Herat local authorities, a key factor that has made it difficult for Afghan defense and security forces to fight against the Taliban is that the militants are equipped with advanced weapons, which are even not available for government forces. They have the most advanced weapons which are neither even in the hands of our national army forces, nor in the hands of our national security operatives, claimed Wahidullah Qetali. Though he did not name a specific country, Qetali claimed that a shell of the weapon which was shot by the militants toward him was provided by a neighboring country.

Accusing Pakistan and Iran of sponsoring the Taliban, Qader Kamil, a political commentator, suggests the government to prevent influence of the two counties by increasing security forces across the borderlines and bolstering Afghanistan’s intelligence operation.

Herat shares border with Iran – a country which has been accused of supporting the Taliban by both Afghan and US officials. The country, however, has always rejected these accusations.

In addition to Taliban attacks, Herat is facing a growing incidence of criminal activities, particularly armed robbery, assassinations, and kidnappings. Protesting against increased criminal activities, Herat money exchangers went on strike on October 13 and Herat jewelers went on strike the next day, October 14. Although the strikes were broken upon request of Mawlawi Khudadad Saleh, chief of Ulema in western Afghanistan, he warned the government that continuation of kidnappings would encourage all Herat resident to go on strike. Speaking to the protesters via a phone-conversation, Afghanistan National Security Adviser, Hamdullah Muhib, assured them that the government will contain security situation in Herat province.

Overwhelmed by increased insecurity, Sultan Dawood, police chief of Herat province, ordered police forces to shot kidnappers, robbers, and terrorists. A week has passed since he ordered but still there is no case in Herat in which the robbers or terrorists are shot by police forces. In a latest case of assassinations in Herat, unknown armed men assassinated Haji Nik Bagh Dashti, a tribal elder, last Wednesday, October 21, in Herat city.

Talking to Kabul Now, deputy chairperson of Herat Chamber of Mines and Industry, called on the government to ensure security of traders and investors. “Insecurities have raised dramatically in Herat and we cannot go anywhere fearing to be kidnapped. Our government must support its traders and manufacturers,” he said, warning that continuation of insecurity will lead to more capital flights.

Reports indicate that a large number of Herat investors have already pulled out their assets from Afghanistan or have decreased it dramatically. This comes despite Herat has an undeniable importance when it comes to its strategic location for the province encompasses several ports, industrial townships, Salma dam, and an attractive location for traders, investors, and jewelers.

The governor, meanwhile, raises doubts over neighboring countries of having hands behind insecurity in Herat in order to harm Afghan private sector. “The whole region is attempting to undermine Herat’s industry but we stood against them and prevented 70 percent of the same goods [produced in Herat] from being imported,” he claimed. He accused the neighboring country, without naming it, of trying to force capital flights from Herat. “It has spread terror and traumatized [the city] for capital, US dollars, and gold should be pulled out and plunge us in poverty.”

Herat governor seems to accuse the neighboring Iran for insecurity in the province. Much of goods imported to Herat are Iranian products and Iran has been frequently accused of smuggling US dollar from Afghanistan in a bid to sabotage economic sanctions imposed by the United States against the country. Some Herat manufacturers told Kabul Now that Iran is providing a part of its demand for dollar banknotes through smuggling it from Afghanistan.

In response to increased insecurity and public criticisms, Abdul Saboor Qaneh, Deputy Interior Minister, dismissed 46 police officers from their posts in a travel to the western province late in September. But still Herat traders and manufacturers accuse former security officials of cooperating with criminal networks in the province.

Ismail Mohammadi, a money exchanger who was abducted earlier, was released from the custody of the kidnappers on Wednesday, October 14, in Herat city. Now local officials confirm that several police officials who were dismissed had hands behind Mohammadi’s abduction.

Naeem Sharifi, who extract marbles in Herat, told Kabul Now that involvement of some government forces in abductions has negatively impacted the public trust in security forces. Therefore, a broad reform is needed, he asserted.

Herat governor, meanwhile, assures that they will identify security authorities who are working with criminal networks and will clean police institution from presence of corrupt officials.

Moreover, spokesperson for Herat governor, Jilani Farhad, they will install around 1,000 security cameras to cover 297 busy areas of Herat city for identifying and prosecuting the criminals. According to him they have already made some preliminary evaluations to that end and will significantly help ensure security of the city.

Part of the costs for installing security cameras will be provided by Herat’s Security sector. Ahmad Saeed Azimiyan, deputy chairperson of Herat Chamber of Commerce and Investment, hoped for a rapid installation of security cameras.