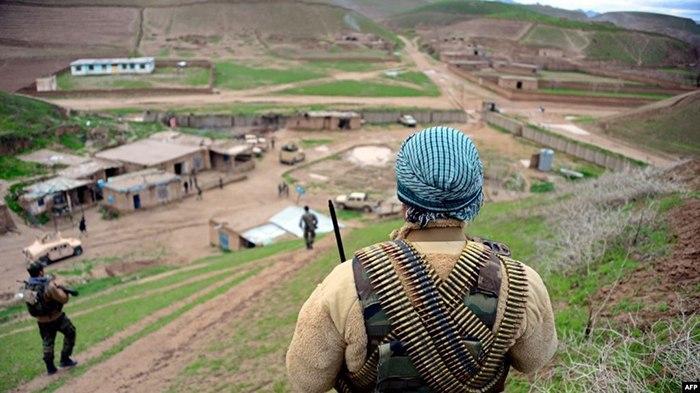 Local officials: 300 military forces are under Taliban siege in Badghis

Talking to Kabul Now, local officials in the western Badghis province warned that a battalion of 300 security and defense forces has become under a tightened Taliban siege in Balamurghab district of the province. They further went on to express concern over a possible increase in Taliban offensives across other Badghis districts, including its capital city, Qala-i-Naw.

According to Abdul Aziz Beig, Chief of Badghis Provincial Council, the government forces are besieged inside the military battalion which encompasses just an area of about 400 square meters. “300 police, military, commando forces and members of the Police special units are stationed inside the battalion under the Taliban siege,” he claimed, noting that the defense and security forces will face a serious problem if not supported by a reinforcement force.

The Ministry of Defense did not comment regarding the issue but a local source who spoke on condition of anonymity stated that the defense and security forces were under pressure as the result of the Taliban siege.

Ziauddin Akazi, an MP who represents Badghis province, accused the central government of hesitating to back up the besieged forces, warning that the battalion will fall to the Taliban if a timely reinforcement was not made in the district. “The war will be expanded to Abkamari, Moqur, Qades, and Jawand districts and the Taliban will even reach at gates of Qala-i-Naw city, if the military battalion falls to the Taliban,” the MP warned. He further complained that the defense and interior ministries have not done anything for security of Balla Murghab district despite his repeated updates on the situation.

According to the local officials, foreign nationals, who speak different languages, are also present among the Taliban militants in Balla Murghab district. They are equipped with much more sophisticated weapons.

Chief of Badghis provincial council, Mr. Beig, identified the foreign members of the Taliban as nationals of Russia, Uzbekistan, and Tajikistan who have been settled in the district along with their families. “Balla Murghab residents say that they are not familiar with languages of these fighters and that they speak foreign languages,” he added. Few days earlier, Badghis governor, Abdul Ghafoor Malikzai also made the same accounts saying that the foreign insurgents were equipped with advanced weapons having night goggles.

As per account of MP Akazi, the night vision equipment of advanced weapons have enabled the Taliban insurgents to inflict heavy casualties on Afghan security forces. “The government forces are supplied with enough weapons but they are not as advanced as those used by the Taliban. The Taliban have night goggles through which they can target government forces from remote distances,” he stated.

Meanwhile, Fawad Aman, a deputy spokesperson for the Ministry of Defense, reiterates that the defense and security forces are capable and have so far inflicted high casualties on the Taliban militants in the western province. “The Taliban have not been able to overthrow any part of Badghis province. The Taliban are suffering higher casualties day by day and get weaker,” he claimed.

For over a year now supplies are hardly made for government forces stuck inside the battalion due to a key military base near the battalion had fallen to the Taliban. According to Akazi, most of the supplies are provided for the military forces through air transportation and that dead bodies and wounded soldiers are transferred with 20 days delay due to hardships caused by the Taliban presence in the area.

The provincial council chief, Mr. Beig, said that the military choppers supplying needs of the army forces are often come under mortar attacks by the Taliban militants. He further added that the besieged Afghan forces were facing food shortage inside the battalion.

As many as 14 civilians were killed and 35 others wounded over past week as the result of mortar shelling by Afghan defense and security forces, according to MP Akazi. “Increased civilian casualties by government forces has enlarged the gap between the people and the government,” the MP added.

However, the MoD blame the Taliban for civilian casualties. “Afghan forces never attack civilians and defenseless people intentionally. The defense and security forces do not hesitate to protect civilians,” said the ministry’s deputy spokesman, Fawad Aman.

Expressing concern over civilian casualties, Abdul Qader Rahimi, head of Afghanistan Independent Human Rights Commission in the province, asked the two warring sides to consider humanitarian law while engaging in war. “The warring parties have paid little attention to the lives and properties of the defenseless people. Civilian casualties must be reduced to its minimum level,” Rahimi stated.