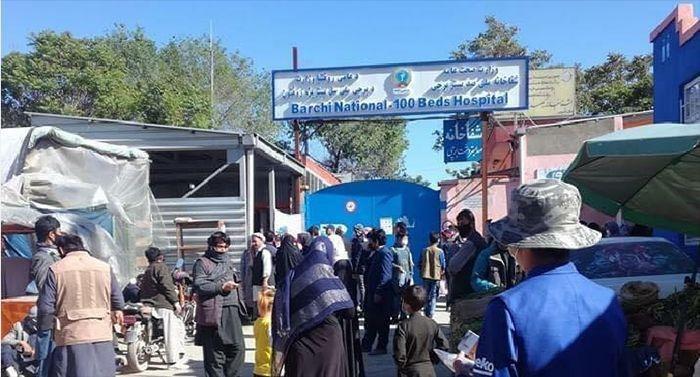 Yassin was talking to other shopkeepers when a terrible explosion jolted Dasht-e-Barchi, a western neighbourhood of Kabul city. It soon became known that Barchi National 100 Beds Hospital had come under attack in Tank-e-Tel area of the neighborhood. Like many others, Yassin, became panic and worried. His heart sank. He recalled that Reza, his cousin’s son and his ill-fated wife and child were still in the hospital. Without closing his shop, he rushed to the hospital. “When I got to the main road, I felt like everyone was running towards the hospital. I forced my feet to support move and get a car. Reza’s cell phone was switched off,” Yassin recalled the moment.

On Monday night, Yassin and Reza took Farideh to the hospital for a very long-awaited delivery. Farida had become able to give birth to a baby after four years of treatment.

Yassin says that he saw an explicably glamour of happiness on Reza’s face the moment he heard the news of his son’s birth, the happiest news of their marriage life. After all, this birth was going to happen after four years of treatment and hope. Following their marriage, the couple realized that Farida was having difficulties in getting pregnant but they never gave up hope.

Yassin says that he managed to find the body of Farideh and her child from Aliabad Hospital at 8:00 PM on the day of the incident. Hours later, he found Reza’s body at Imam Khomeini Hospital. “God forbid that anyone should not grieve over the loss of loved ones. The night before, I arrived at the hospital safe and sound, but then I had to take the [dead] bodies of all three home. “Whatever I did, I can’t believe it.”

Yassin and Reza lived together for almost seven years in the Qala-e-Naw area of western Kabul. In a small house inherited from Yassin’s father.

Now with a black piece of cloth hung over gate of their house, as sign of mourning, their house looks gloomier than ever. Yassin is sitting in the courtyard and still can’t believe that Reza and Farideh are no longer alive. Yassin’s tangled hair and fixed eyes tell of the pain that has accumulated in his chest. “I hate this world a lot, every day you hear a sound [of explosion] you have to witness the death of your loved ones. Let there be dirt on this government for we, the poor people, are only getting the death, nothing else,” when Yassin said this, he did not take his eyes off the ground and continued to clear the tears rolling down his face. Pointing to the empty house, he lamented, with a deep pain in his heart, for the empty place of Farideh.

According to Yassin, his cousin was a daily-wage worker. Every morning when the sun raised, he would go to distant places like Paghman, Darulaman to build houses and shelters for other people in the city. Working with prickle of her needle during days and nights, Farideh also put her life on the line to help Reza in building their life. “The night when we took Farideh to the hospital, Reza had no money and borrowed 2,000 afghanis from me. When the lockdown was announced, his job was closed. He would sometimes take wheelbarrow and sit in front of the hangars to carry someone’s luggage, but returned empty-handed every night,” said Yassin bluntly while leaning his head on the wall.

The maternity ward of the hospital came under a brutal attack on May 12, allegedly by the militants of the Islamic State Khurasan Province. 24 people, mostly mothers, were killed and 16 others were injured in the incident. The maternity ward was run by the Doctors without Borders (MSF) which provided maternity healthcare for around one million population of Dasht-e-Barchi. On June 15, the MSF announced its withdrawal from the hospital and ceased its activities fearing similar attacks will happen in the future. Since then many efforts, including a wide campaign on social media with the hashtag #Stay4LivesMSF, have been done but in vein.

Four years of hope ended up in deadly attack

Zubaida (alias), a nurse who treated Farideh and dozens of other mothers, is now living with a lasting trauma of the attack. “I can’t sleep since that day. All the scenes start appearing whenever I close my eyes,” she says, noting that it was a “very tough” time. Wiping away her tears, Zubaida says that the child was Farideh’s first and long-awaited baby. The tears and sorrows cannot stop the nurse of retelling the sad story. She continues with a big lump in her throat saying that all the severe delivery pains faded away when Farideh gave birth to her first and last baby son. According to Zubaida, the couple shared the same level of happiness for the birth of their son who had “thick and black” hair. “When I congratulated the birth of the baby son to his father, he was not fitting in his skin,” the nurse said about the extreme happiness that changed into sorrow within hours.

According to Zubaida, Farideh was getting ready to leave the hospital the next night but suddenly they found themselves in war and within bullets. “Suddenly the women started screaming from every corner who I felt were running to different directions, the sound of the bullets hitting the windows, the glasses started shattering, and the babies were crying.”

Zubaida says, she has survived the attack after getting into a safe-room with a patient. The nurse is now wishing that she would never have seen the scenes she saw after getting out of the safe-room. “All were fallen in a corner, the fallen nurses were lying with bloody masks, there were streams of blood,” the nurse described the scene, adding that she felt dizzy and nauseous. “The patients were lying on their beds covered in blood with no breath.”

Zubaida saw the patients whom he visited hours ago, all fallen on the ground. “After that, we were taken out by the police and I still see the scenes in front of my eyes,” said Zubaida. According to her, Farideh had been hit with a bullet on the head and the sunk in blood.

After days, Yassin still can’t believe that Reza and Farideh will not return home: “It is very difficult, I buried myself with Reza. After my father’s death, now I feel much lonely again and I don’t want to leave the house and go to the shop.”

The room in the corner of the yard is from Reza, which is now empty. Yassin takes me to his cousin’s room and points to a wall with a picture of Reza on it, along with the fetal ultrasound of Farideh’s son hanging on the wall: “Look, they hanged this up here. Because they loved him and wanted him so much.” Yassin continued to show me the love and enthusiasm of the lost couple for their baby son and how passionately they were waiting his birth. Inside the dresser, some baby clothes were seen hanging on with pink and yellow colours. “Look, they had bought this times ago, and Farideh played with it every day and waited for her son,” he said, ending with a hearth-breaking sentence that “all the three are now lying under the ground.”

This story has developed by Massoma Erfan