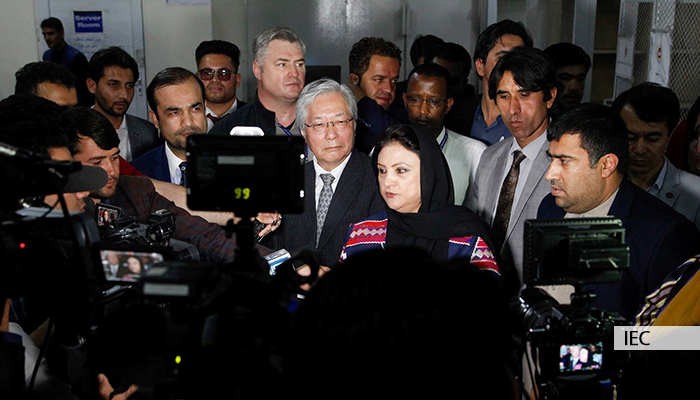 UNAMA under fire for interference in Afghan election affairs

Many Afghans are lambasting on United Nations Assistance Mission for Afghanistan (UNAMA) for what they say UNAMA’s interference in affairs of Afghanistan’s Independent Election Commission (IEC).

An official letter, apparently signed by Tadamichi Yamamoto, the head of United Nations Assistance Mission in Afghanistan, came out on Monday, November 11, expressing serious concern of the United Nations over behavior of Mawlana Abdullah in a meeting held to discuss election-related issue on November 05.

“During the meeting, UNESP technical advisors and the international commissioners witnessed direct life-threatening statements being made against Mr. Bashir Ali, Database Manager for the National Tally Center, by Commissioner Maulana Abdullah,” the letter read.

In reaction to UNAMA’s official letter, Mawlana Mohammad Abdullah, a member of the IEC, said that concerns mentioned in the letter issued by UNAMA are baseless. He called on international organizations to launch a probe on ‘accusations’ raised in UNAMA’s letter. In a tweet, Mr. Abdullah said: “I never allow myself to insult anyone for his belief. I have not blasphemed the sacred of any ethnic group and have not threatened anyone to death. I will file a complaint against UNAMA.”

Abdullah called on UNAMA to remain impartial and not listen the ‘channel’ of lobbyist formed by the local employees at UNAMA office.

This came while, an audio tape, attributed to Shinkai Karokhail, an Afghan MP who is close to the Afghan President Ashraf Ghani, leaked that a ‘channel’—comprises of local employees at UNAMA office—have lobbied for state builder presidential ticket at UNAMA office.

The United Nations Assistance Mission in Afghanistan, by mandate, is a political mission that supports the Afghan government and people. It also supports the Afghan electoral process, peace reconciliation and protection of civilians in armed conflict. It also provides technical advice to the country’s election commission.

In a statement, the Council of Presidential Candidates accused UNAMA of interfering in business of the IEC. Rahatullah Nabil, the former chief of National Directorate of Security, who is running for the 2019 presidential election, called on UNAMA to remain impartial. The former Afghan president, Hamid Karzai, also pressed UNAMA not to interfere in Afghan election affairs.

On social media, many Afghans say that UNAMA have deleted their comments posted under UNAMAnews updates, particularly on Facebook. They describe the move as a way to suppress freedom of expression. “UNAMA leads campaign to block and silence critics on social media over impartiality concerns, as electoral process gets more complicated. Unfair and damaging for reputation of democratic institution,” wrote a leading Afghan journalist on his Twitter account.

In response to Kabul Now, Liam McDowell, a spokesperson for UNAMA, said, “There is no ‘channel’ to UNAMA. Any person saying, they have ‘channels’ in to UNAMA is mistaken.”

“UNAMA has a very strong established record in promoting and protecting freedom of expression in Afghanistan. We would request audiences to fairly review our work with thousands upon thousands of Afghans when it comes to helping support freedom of expression. Nothing has changed in that regard. We will continue to do everything within our abilities to defend all persons’ fundamental right to freedom of expression,” Mr. Liam replied in an email to Kabul Now.