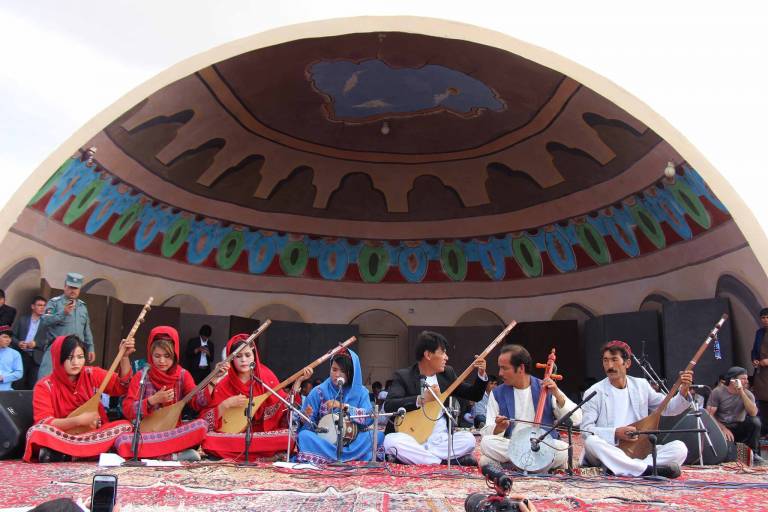 Gathering under an umbrella called Ulema Council of Bamyan Center, a number of local religious scholars and representatives of offices of high Shia clerics issued a declaration on October 03, warning that they will cut ties with Bamyan governor as he promotes Dambura festival—a festival, they say, is against Islamic values.

The central province of Bamyan makes headlines when it comes to cultural events in the war-torn Afghanistan where media offices are usually overloaded by news of explosions, suicide bombings, airstrikes, and political tensions. At least four major cultural events including Silk Road festival, A Night with Budha, Dambura Cultural Festival, and Potato Flower Festival have been celebrated in the last 15 years in the ancient tiny city of Bamyan that is home to two giant statues of Budha, a legacy that represents pre-Islamic civilization.

In the year 2019 as the cultural department of local government was preparing to arrange the Dambura Festival, a number of religious scholars put hard efforts to ban the festival calling it harram, religiously forbidden. Despite the opposition by religious leaders, the festival was held and thousands of people including women cheering the music enjoyed it.

Opposition against Dambura festival is drummed again as a number of religious scholars have just recently warned to cut ties with Bamyan governor, Tahir Zuhair, over what they labeled as promoting unlawful acts.

As read in the introduction of the declaration, representatives of four prominent high Shia jurists in Afghanistan—Ayatullah Sistani, Ayatullah Mohaqiq Kabuli, Ayatullah Fayyaz, and Ayatullah Sherazi—have asked every religious scholar to stand against any ‘anti-religion move’ by the incumbent governor.

“According to all ulema and Marja al-Taqlids, these actions are haram,” part of the declaration reads, adding that neither bringing happiness, nor attracting tourists, nor development of economy, nor supporting artists could justify or legitimize the acts.

In June 2015, Bamyan was officially named as the first ever cultural capital of the South Asian Association for Regional Cooperation (SAARC).  As the first historical city from Afghanistan and Central Asia, in 2015, Bamyan was registered on the list of the UNESCO Creative Cities Network for its handcrafts and folk arts.

Dambura is a key element of folk art of the ancient Bamyan. Many artists who play the instrument visit the city just to attend Dambura festival. Though locals in Bamyan love Dambura, the instrument has faced opposition by the conservative segment of the Bamyan society in recent year.

Talking to Kabul Now, Sayed Eskandar Alawi, representative of Ayatullah Fayyaz in Bamyan accused governor Zuhair of undermining religious scholars and using harsh terms against them. “The governor must find a solution for himself, heal his relations with clerics and rectify his language,” he asserted.

Addressing a public gathering held to commemorate the anniversary of Afghanistan’s Independence Day, Zuhair publicly criticized religious scholars’ opposition against Dambura festival and noted there is no clash between religion and art.

In part of his speech which is still being circulated on social media Zuhair, addressing the religious scholars in the province, says, “no one of you can dare to issue a declaration against terrorists, takfiris, Daesh, Taliban, their financial sponsors, masters, and neighbors.”

The conservative Afghan society has a long record of strong opposition against art—in particular music. During their rule, the Taliban regime had banned listening to music.

Esmail Zaki, who is coordinator of the human rights and civil society networks in Bamyan, says religious scholars’ opposition against Dambura festival enlarged when the festival coincided with death anniversary of a political leader, Sayed Hussain Anwari. He believes the opposition has been developed on the basis of deep political and ethnic basis.

Mr. Zaki, however, believes religious scholars are principally accountable to their financial sponsors and they oppose Dambura festival for appeasement of their sponsors.

Rejecting any religious base of their opposition, in his public speech Zuhair had also accused that a number of religious scholars were attempting to fuel sectarian conflicts in Afghanistan.

Spokesperson for Bamyan governor, Abdul Rahman Ahmadi, told Kabul Now that there was some political agenda behind the opposition of religious scholars.

Sayed Eskandar Alawi, not completely rejecting any possible political incentive behind the opposition, argues the opposition has root in religion, not in politics. “Bamyan is religious, culture, power and ideological center for Shia in the central region. When Shia culture is being destroyed here then culture of all Harazarajat and Shia populated areas will be affected,” he clarified.

University lecturer Abdul Raheem Akhlaqi believes the recent declaration by the religious scholars is more like a personal decision rather than a decision taken on basis of religious thought. According to him, there is no clash between religion and art and opposition such as this one represents ‘extremist interpretation’ of Islam.

The governor spokesperson, Ahmadi, says opposition of the religious scholars is something common in diversified Bamyan society. “We do not mute their voice. We have not felt any effect of these declarations, statements, and decisions on the people’s relationship with the government,” he asserted, adding the government and people have a friendly and good relationship.

Held three times in a year since 2017, Dambura festival is sponsored by the Chinese government aiming to promote folk art and attract more tourists to the ancient yet extremely poor Bamyan province.

Organizers of the event argue that in addition to enriching local music it will contribute to boost the poor economy of locals as more tourists visit the province to attend concerts.

According to the governor, around 100,000 tourists have visited the province during the first week of Eid al-Adha festivity of the 2019.

“We are not promoting fahsha, prostitution, and wrongs. We are promoting tourism,” Zuhair said arguing that tourism boosts up economy of the poor Bamyan where 61 percent of the population live below poverty line.