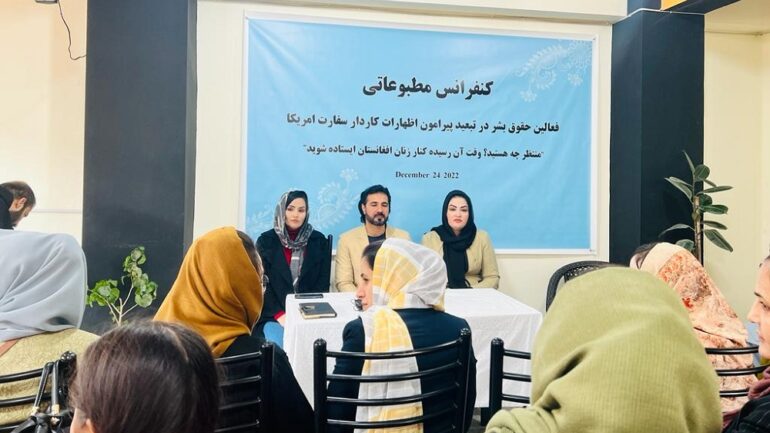 Sanctions Against Taliban Should be Intensified, Say Human Rights Defenders in Exile

Human rights defenders in exile have urged the international community and the United Nations to intensify sanctions against the Taliban.

In an official letter sent to state and private universities, the Taliban Ministry of Higher Education has indefinitely banned higher education for female students.  In response to this decision by the Taliban, Karen Decker, the Chargé d’Affaires at the US Mission to Afghanistan based in Qatar, has asked Afghan men to stand by the protesting women.

In a press conference in Pakistan today, December 24, a number of human rights defenders supported the statements of Karen Decker and urged the people of this country [US] not to leave Afghan women alone.

“We highly urge the people of Afghanistan, especially the men in the country, to stand by women and take part in women’s civil movement.”, reads a part of the resolution drafted by these human rights defenders.

Following the Taliban’s ban on women’s university education, a number of lecturers at state and private universities have resigned from their posts to protest the Taliban’s cabinet decision. A number of male students reportedly refused to attend classes and take examinations in the capital city and many other provinces of Afghanistan.

Human rights defenders have strongly urged the international community, especially the United Nations, to intensify sanctions against the Taliban.

In the resolution, the human rights defenders said, “We ask the international community and the United Nations to stop sending 40 million dollars to the Taliban government.”

The recent decision by the Taliban drew global-level reactions. Many Islamic countries have called on the de facto administration of Afghanistan to reverse the decision and respect human rights.