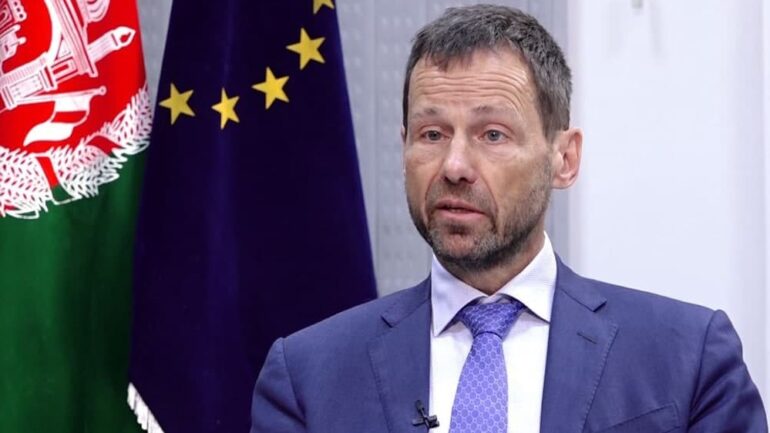 EU Special Envoy: I Am Appalled by Taliban’s Public Floggings

Special Envoy of the European Union (EU), Tomas Niklasson, has said that he is “appalled” by the Taliban’s public floggings of 14 men and women in Logar province. “They follow a serious backslide in the respect of human rights in Afghanistan since August last year,” he added.

The EU’s envoy made this reaction late on Saturday evening, November 26, in a tweet thread.

Pointing to similar forms of punishments practiced in other countries, he said that the EU calls on these countries, including Afghanistan, to honor their obligations under international law.

Describing these punishments as “corporal punishment”, the EU’s envoy expressed it as inhumane which is prohibited under the Convention against Torture and the International Covenant on Civil and Political Rights. “Afghanistan is a State party to both and, as de facto authorities, the Taliban are bound to uphold them,” he noted.

According to the EU’s envoy, the Taliban has failed to deliver on the EU’s consistent call for respecting the Rule of Law and clarifying the Constitutional and legal framework in line with the international obligations of Afghanistan.

Moreover, Niklasson said that he respects the debate among Afghans, including within the Taliban, on different interpretations of Sharia and how it is practiced.

UN officials and other foreign diplomats had previously criticized the Taliban’s public floggings and described it as cruel and inhumane.

Issuing a statement on Friday, November 25, the Office of the High Commissioner of the United Nations Human Rights said that the Taliban’s latest actions against women may amount to a “crime against humanity.”

The statement quoted UN experts, including Richard Bennet, calling on the Taliban to abide by all international human rights obligations, immediately release the human rights activist Zarifa Yaqobi and her male colleagues, respect people’s rights to assemble freely, and repeal punishment of male family members for transgressions of women.

Furthermore, the UN experts call for an immediate opening of all secondary schools for girls, and the immediate removal of restrictions on women from accessing public locations.

Reacting against the statement and remarks by other western diplomats, the Taliban spokesperson, Zabihullah Mujahid, described them as “disrespect” to Islam and against international standards in a tweet on Saturday, November 26.

“Countries and organizations should not allow people to make irresponsible and provocative statements on their behalf about the blessed religion of Islam,” the Taliban spokesman warned.