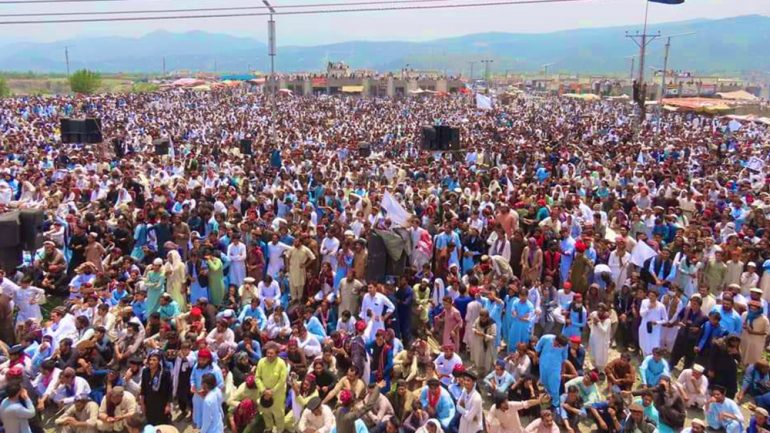 PTM calls for an end to Pakistan’s interference in Afghanistan

Organizing a massive public gathering in Makeen, South Waziristan, on Tuesday, July 27, the Pashtun Tahafuz Movement (PTM) called for an end to Pakistan’s interference in Afghanistan. “PTM will no longer let anyone to use Pakhtunkhwa soil against Afghanistan,” the PTM leader, Manzoor Ahmad Pashteen wrote on his Facebook page.

In his Facebook post, Pashteen also noted that the war in Afghanistan has brought devastation and destruction to Pashtuns populated regions of Pakistan. “We do not accept anyone’s war policy in our soil,” he asserted, complaining that the Pakistani administration has always used “our soil” against Afghanistan.

Pakistan has long been accused of providing save heavens for the Afghan Taliban who have dramatically intensified deadly attacks in recent months in Afghanistan killing scores of government forces and civilians.

Though the Pakistani government has often rejected these accusations, Pakistan’s interior minister admitted late in June that the Taliban dead bodies are taken to Pakistan, their wounded receive medical treatment, and the militants reside in Pakistan along with their families.

On the other hand, participants of the massive gathering, including Pashteen and Afrasiab Khattak, complained Pakistan’s government attempts to prevent the gathering and Pakistani media for not covering the event.

“The gathering opposed the undeclared war against Afghanistan from Pakistani side killing innocent people,” Khattak tweeted, noting that it was held in solidarity with the Afghan people. “No coverage in Pak media,” he wrote in cynical tone while posting photos showing thousands of participants in the gathering.

This comes as the relations between Afghanistan and Pakistan have worsened in recent months, particularly after daughter of Afghan ambassador was kidnapped for several hours in Islamabad on Friday, July 16.

The two countries have called back their ambassadors from Islamabad and Kabul.