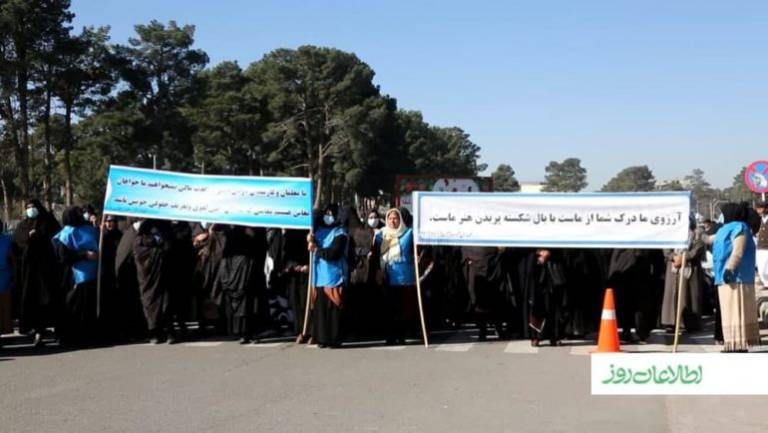 Tens of school teachers held a protest rally outside the governor’s office in the western Herat province, asking for a pay rise. The protesters warned they will continue to strike if their demands are not addressed.

The government has a “discriminatory” behavior when it comes to setting salaries for school teachers, Rabia, a protester, told Kabul Now. The school teacher complained that a monthly-paid 7,000 afghanis are insufficient to cover her needs. “A teacher is not a beggar; it’s our legal right,” she said.

The protestors handed over a resolution to Herat governor, Sayed Abdul Wahid Qatali, demanding an increase in their monthly salary.

Talking to Kabul Now, Ashraf Sadat, a civil society activist in Herat, said that the huge differences existing in salary ranges of civil servants is a sign of “discrimination”. He noted that school teachers need to have a “strong financial support” to make meaningful contribution for a bright future of the country.

The protest come as the Parliament and the government have stuck in a conflicting position to approve the national budget plan for the 1400 Fiscal Year. The Parliament has so far rejected the draft budget plan proposed by the Ministry of Finance twice.

Mir Rahman Rahmani, the Parliament Speaker, said on January 13 that setting a balanced salary scale for the Afghan civil servants is a “redline” for the Parliament. He said that the Parliament would not approve the national budget plan until the government do not accept the demands raised by school teachers, families of the martyred, soldiers, and retired government employees.

Mohammad Khalid Payanda, caretaker of the Ministry of Finance, said on Monday, February 15, that in the 1400 Fiscal Year, the government will significantly increase salary of school teachers and low-level civil servants.

The Afghan government is determined to decrease salaries of the President, Vice Presidents, cabinet ministers, and other spending in a bid to add to the salaries of low-level civil servants, Mr. Payanda said. According to the acting finance minister, the salaries and number of senior national advisers who are paid high scale salaries will be reduced too.