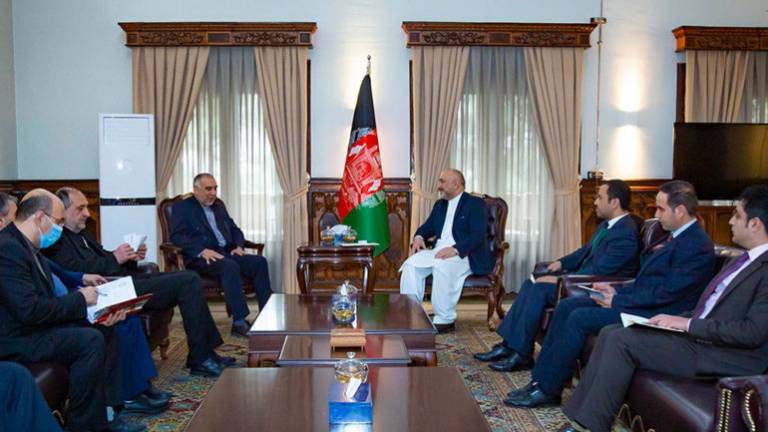 Taliban stance has not changed and the group still reiterate on their previous strategy, said Iran’s Special Envoy for Afghanistan, Mohammad Ibrahim Taherian Fard, while briefing the Minister of Foreign Affairs, Haneef Atmar, about recent visit of the militant group’s delegation to Tehran.

According to the statement, Atmar has highlighted three major areas in which the Taliban have violated their peace deal signed with the United States on February 29, 2020. The Afghan foreign minister has detailed that 90 percent of the released Taliban prisoners have returned to battlefields, increased the violence, and kept their relations with the Al-Qaida and other terrorist groups.

Moreover, the two sides also discussed how to strengthen regional cooperation in support of the Afghan peace process during the meeting.

This comes after a top Taliban delegation led by Mullah Abdul Ghani Baradar, the group’s deputy leader and head of its political office in Doha, paid a visit to Tehran meeting some high officials of the neighboring country, among them with Iran’s foreign minister, Javad Zarif.

The Taliban visit and subsequent remarks made by some Iranian officials sparked criticisms in Afghanistan.

However, the Ministry of Foreign Affairs said in a statement that the Afghan government was taken on board regarding the Taliban’s visit to Iran.