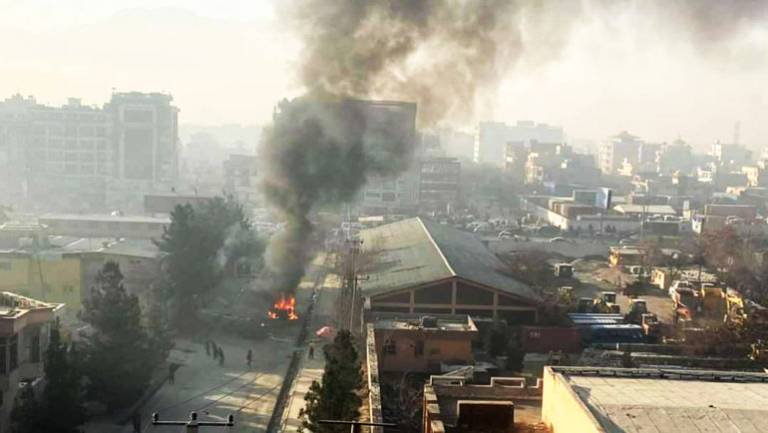 As many as three members of the Afghan Public Protection Force (APPF), including its spokesperson, Zia Wadan, were killed and one other was wounded when their riding vehicle hit a roadside bomb planted in the first street of Karte Naw, a neighborhood in PD8 of Kabul city, a government source confirmed.

The source, who spoke on condition of anonymity, said that all the victims were members of the APPF.

Meanwhile, Tariq Arian, spokesperson for the Ministry of Interior, blamed the Taliban for the attack. He, however, did not provide details about the casualty toll and identity of the victims. “Using IEDs and landmines are considered as war crime and the Taliban are liable for these crimes and killings.”

On the other hand, at least 12 civilians were killed and two others wounded as a result of an airstrike conducted by the Afghan Air Force in the southwestern Nimroz province, according to Baz Mohammad Naser, chief of Nimroz Provincial Council.

Talking to Kabul Now, the local official claimed that the civilians were killed in the Afghan airstrike which targeted a Taliban customs’ office in Khashroad district of the province last night, January 09.

However, some local residents confirmed to Kabul Now that relatives of the victims have already taken the dead bodies, including women and children, to Nimroz provincial hospital. The source added that the victim’s families are demanding justice for their lost loved ones.

Rahmatullah Omar, spokesperson for Nimroz governor, meanwhile, expressed unawareness regarding the incident, adding that investigation was underway in this regard.

Situated in the southwestern part of the country, Nimroz is a volatile province where the Taliban actively operate in some of its districts, including Khashroad.