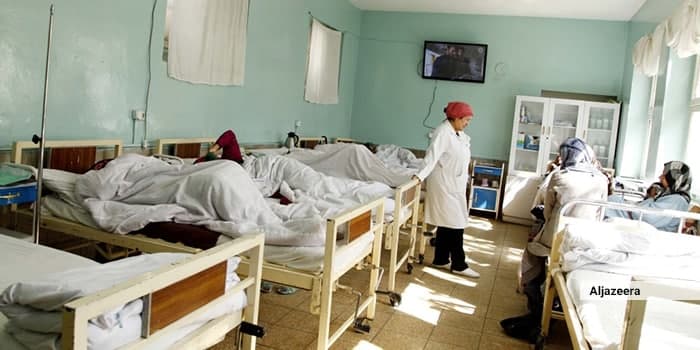 The 45-year-old Meena Jan, who seems happy to have recovered, says that she got married before seeing her first menstruation. She has had 13 deliveries of which only nine have survived. Seven years ago, Meena went through a painful bleeding as she underwent a hysterectomy surgery.

After this surgery, she began to develop fistula, a common yet undiscussed disease in remote areas of Afghanistan.

According to a health survey conducted by the Ministry of Public Health in 2015, three percent of women aged between 13 and 49 suffer obstetric fistulas. Majority of these women live in remote provinces including Ghor, Badakhshan, Baghlan, and Daikundi, according to the survey. The survey also shows that four out of every 1,000 pregnant women in Afghanistan are likely to suffer obstetric fistulas.

Fistula in Afghanistan is an untold disease about which most women refuse to talk even with their closest friends and family members. Most often when women, who suffer fistula, visit doctor receive negative response. As Afghan doctors in remote areas do not have facilities to treat fistula, in most cases they tell fistula patients that their disease has no remedy. Lack of awareness coupled with lack of medical facilities have caused to creation of a perception among ordinary Afghans who take fistula as a curse doomed by God.

Huma Dost, a gynecologist and obstetric fistula surgeon, who has been working at the Cure Hospital in Kabul for eight years, says that home-deliveries, in the absence of an experienced obstetrician or midwife, increase the risk of being infected to fistula.

In Afghanistan, most families living in rural areas, do not have access to health facilities and some Afghan families under practice of old customs and tradition, prefer home-delivery to birth at maternity hospital.

“When a mother, who is giving birth, is taken to a hospital at the last minute, her uterus might get torn and her baby might born dead. This is what that increase the risk of getting fistula,” she says.

According to experts, poor nutrition coupled with poor diet is another cause of fistula. Dr. Dost says that, “in Afghanistan, less attention is paid to girls. Baby girls are not properly nourished and they don’t complete their childhood vaccinations. These girls also suffer from malnutrition when they reach a young age. Women, who are underweight and short in height, are exposed to risk of developing fistulas.”

Premature birth also causes fistula. Women who marry before the age of 18 and become pregnant are more likely to develop fistulas because their vaginal elasticity does not fully develop, something that increases risk of fistula.

Generally, illiteracy, lack of awareness about women bodies, and the families’ lack of access to health services are some of the main factors leading to obstetric fistula in women.

The accommodation including travel cost to Kabul would be covered by the hospital. In addition to this, the hospital conducts annual awareness programs in which a number of midwives and health workers from different provinces are invited to Kabul to learn about treatment and prevention of fistula.

Malalai Hospital is another health center in Kabul that has been providing free services for fistula treatment since 2010. The hospital also has an average of 50 fistula patients a month who come from remote provinces of Afghanistan.

Dr. Adela Achakzai, an emergency specialist at Malalai Hospital, who has been working at the hospital for 17 years, says that if a woman cannot control her urination 24 hours a day, she will develop a number of health problems over time, including arthritis. She has seen many cases of which women are rejected by their family members, including their husbands, after knowing about women’s problems.

One of the serious problems women face as a result of getting infected to fistula is development of a bad odor in their genitals, she says. Due to lack of information among most families, these women lose their respect and status. They would be left by their husband and isolate themselves because they are unable to socialize with others.

The 25-year-old Fatima, who has been suffering from fistula since her first child-delivery, says that although five years have passed from that moment, she still cannot visit hospital to have surgery. Fatima is depressed and isolated. She has been living with her mother, since her husband, who was abroad, left her after realizing her health problem. Fatima’s mother says that at first, she persisted Fatima to visit a doctor and she kept refusing. Now due to gaining weight, it is impossible for Fatima to visit a doctor and go through a surgery, says her mother.

According to Dr. Achakzai and Dr. Doost, in some cases fistula patients have recovered after tolerating pain for 25 years, but a complete recovery, they say, depends on degree and severity of fistula.

“Ever since I experienced fistula, I have not been able to walk out of the house,” says Meena Jan. “I have endured many hardships and suffered a lot. During these seven years, my nephew got married and my son was martyred, but I only accompanied them from corner of my house with teary eyes and a heart full of joy and sorrow.”

Over last seven years, Meena Jan has had three operations at Zabul Hospital which were unsuccessful. She finally recovered after going through a fourth operation at Cure Hospital in Kabul. “The bad odor coming out of me made my husband to stay away from me, but he never thought of leaving me or remarrying. During these years, my children helped me a lot by providing me with pumps and other necessary items,” she said while wiping away her tears.