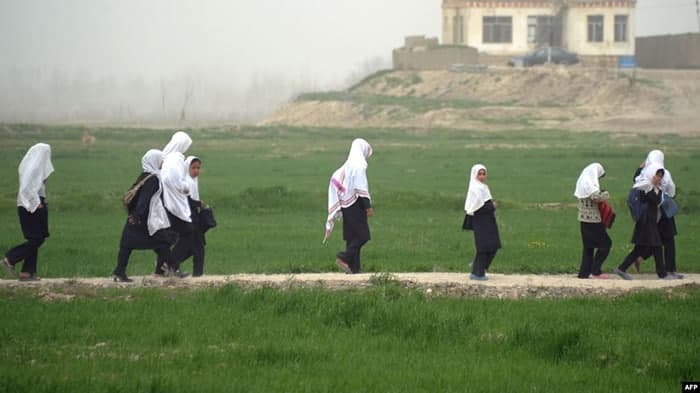 Afghan girls do not give up dreaming a different future

“A nightmarish apprehension takes my mind every night, fearing that my father may discover my secret of going to university. Every day as I come back home from my university, I do the chores so as not to give any excuse to my mother and sister to let know my brother and father about secret story of my university,” says Sahar (a nom de guerre to hide her real identity).

For Sahar enrollment in university has not been an easy task. She has been doing embroidery to afford paying costs of her higher education. Upon her graduation from high school, as her brother and father did not permit her to pursue higher education, Sahar adopted a new strategy: she secretly, hidden from his father’s and brother’s watch, made university entry exam and got enrolled in a university.

In Afghanistan, women are struggling to make their ways into higher institutions of education. Many Afghan girls in remote provinces like Helmand and Uruzgan quit getting education before graduating from high school. Though some progresses have been made over the last two decades in the area of human rights, a number of Afghan families, even in the capital Kabul, do not allow their girls to attend higher institutions of education.

“My father would buy me the best clothes and jewelries but he would not allow me to attend school. I completed seventh grade but I was not allowed to continue and graduate high school. Every time that proposer came to ask my hand, I would pray he would turn out supportive in terms of my education,” says Moqadasa, who dwells in Kabul.

Moqadasa was born into a family that gives less value to women education. Typical as many conservative Afghan fathers, her father did not allow Moqadasa to graduate high school.

But she did not give up dreaming a different future.

With full support of her mother, Moqadasa continued her education—secretly from her father’s watch, who strongly believed women were born to look after household affairs—and successfully completed her high school.

After graduating high school, Moqadasa put efforts to pursue higher education. But she regrets how she missed taking university entrance exam. “It was very difficult for me to study clandestinely at that time. In midnight, when everyone was asleep, I would wake up and study in kitchen so that I could prepare for the exam. Unfortunately, my father was at home on the day of exam, I could not take it.”

According to a study conducted by Women and Children Legal Research Foundation (WCLRF), more than 60 percent of girls drop out of school before the age of 15 for a variety of reasons, including marriage. According to the survey, 64 percent of the girls give up school under pressure by male members of their families.

A large number of Afghan families do not send their daughters to school. A restrictive anti-women culture coupled with security concerns push many families to force their daughters leave school. According to report by Human Rights Watch, 206,000 girls in Afghanistan are deprived of education.

Hamida, a resident of Jaghori district of Ghazni, shares similar experience as Moqadasa. When she finished third grade, her father asked her to get religious education and leave school but she did not give up pursuing her education. Under pretext of going to mosque, she attended school.

Hamida paid the price but did not give up.

“I remember how my head was broken by my father, who beat me with stick and stones in the presence of my friends. My mother was also punished,” says Hamida, who has graduated from high school.

In Afghanistan, 3.7 million children have dropped out of school—a 60 percent of whom are young girls, according to Najiba Arian, spokesperson for the Ministry of Education.

There is no statistics about the number of girls who secretly get education, studies show may girls are facing serious restrictions ahead of getting education.

Zabihullah Farhang, spokesperson for Afghanistan Independent Human Rights Commission (AIHRC), says that the Commission has not received any complaints on girls being banned of going to school.

Though the government and international community put efforts to provide education opportunity for Afghan children, a large number of Afghan girls are deprived of getting education. Girls like Sahar, who has made her way into university, is a rare exception.

“Although, I was shortlisted for two scholarships in Iran and India, I rejected both, fearing that of my father get to know my secret,” says Sahar.

Amid war and violence, getting education remains a yet-unfulfilled dream for a large number of Afghan girls. Thousands of young Afghan girls in remote southern Helmand province are out of school. Girls’ schools are closed down in Taliban-controlled areas.