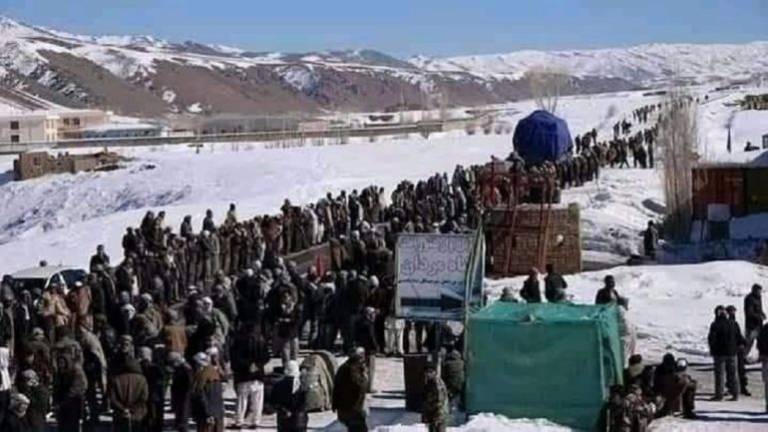 10 killed and 28 wounded in Behsud, leaders call for calm

The Ministry of Interior Affairs (MoI) said that nine people were killed and five others were wounded after a protest turned violent in Behsud of Maidan Wardak province on Friday, January 29. Tariq Arian, spokesperson for the MoI, said that the protest turned violent after a clash erupted between the security forces and armed men loyal to Alipoor, a local commander in Behsud district.

According to the MoI, a group of locals held protest outside police headquarters, protesting appointment of new police commander in the district.

Police has arrested as many as 68 “irresponsible armed men”, said the MoI.

But an MP who represents Maidan Wardak gives a different account.

Mahdi Rasikh, an MP who represents Maidan Wardak, says that security forces led by Allahdad Fedaee, the police chief of Maidan Wardak, opened fire at a peaceful protest held by local elders. As many as nine civilians were killed and 20 others wounded in police firing, according to Rasikh. He denies Alipoor’s involvement in clashes.

A statement issued by a group who is advocating for Behsud victims, calls on the government to take immediate action and stop attack on civilians. “The security force dispatched to Behsud, in addition to brutal killing of civilians, have taken civilians as hostages. The MoI should immediately release the hostages,” the statement said. The central government and top security authorities will be held responsible for the consequences of the clash erupted between people and security forces, the statement noted.

Meanwhile, the group claimed that as many as 10 people were killed and 28 others wounded after security forces opened fire on the peaceful protesters.

In a statement issued today, Saturday, January 30, Hamid Karzai, former president, has expressed concerns over killing of locals in Hesa-e-Awal Behsud. He called on the government to resolve tension between government and locals in a peaceful way.

On the other hand, Mohammad Karim Khalili, the leader of Hizb-e-Wahdat Islami Afghanistan, in a statement issued on Friday evening, called on the government leadership to pull out security forces who opened fire at a peaceful protest of people in Behsud.

The MoI has sent a delegation to Behsud to investigate the incident.

This is the first time police opening fire at people in Behsud district of Maidan Wardak. Alipoor, who leads a group of uprising forces in the district, is a pro-government commander who has been fighting against the Taliban insurgency in Behsud.

A local source says as many as ten were killed and 28 others wounded in police firing.