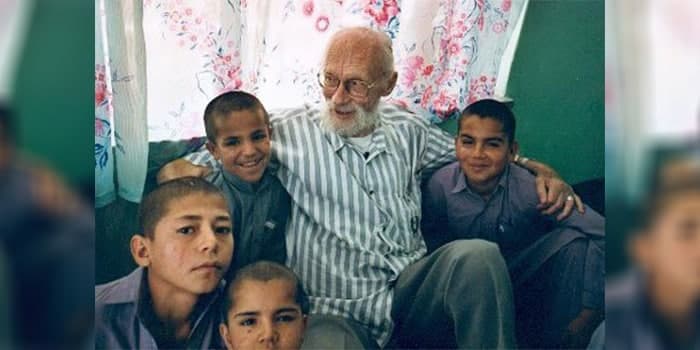 Serge de Beaurecueil with his adopted children posing for a photo in Kabul
KabulNow·December 8, 2020

“Father Serge had a kind heart. [He loved] to help children-in-need. He would take them to his home and raise them up,” says Alireza who was raised and fed by Serge de Beaurecueil, a French philanthropist who dedicated his life to raise and feed Afghan children who had lost their parents.

Born on August 27, 1917 in Paris, Serge de Beaurecueil began to learn Arabic when he was 14. In 1950s, he established Dominican Institute of Oriental Studies in Cairo. During his 17 years of stay in Egypt, Serge was interested in Islamic mysticism and later he took particular interest in Khawaja Abdullah Ansari (1006–1088), a Sufi poet who lived in Herat, Afghanistan. His love for Ansari, pushed him to learn and master Persian language and later he published a serious work on Khawaja Abdullah Ansari, titled as Ansariyat, which included two Arabic interpretation of Manazel-al-Sa’irin written by Khawaja Ansari.

In 1955 for the first time, Serge de Beaurecueil was officially invited to visit a literally festival in Kabul and talk about Khawaja Abdullah Ansari. His visit to Kabul sewed a deep love connection between him and the culture and people of Afghanistan and he remained connected with Afghanistan throughout his life.

Later in 1962, he received an offer to work at Kabul University as a professor, teaching history of Sufism. He moved to Kabul and as the only priest in an Islamic country, Serge started working.

It did not take him long to witness a series of challenges many Afghan children were going through. He changed his house to a safe house for street children, orphans, and children with disability. Seeing the plight of Afghan orphans, he dedicated his life to adopt, educate, and raise those children who had no one to support and nowhere to sleep.

Alireza Hamdard is one of few who has been raised by Serge de Beaurecueil. He lost his nomadic parents when he was four years old. In 1972, when Alireza was six, he was taken to Wazir Akbar Khan Hospital to undergo a leg surgery by a Japanese surgeon, he happened to meet Serge who took him to his house where ten other Afghan orphans were living.

48 years have passed since then and the 54-year-old Alireza is currently employee of Polytechnic University and works at the University’s information technology department.

Same as Alireza, Wali Hamidi was also raised by Serge at his home. In 1950 when Wali was 13 years old, he lost his legs in a mine explosion. His family used to live at PD1 on top of the hills in a small house, a point which was difficult for him to shuttle around. He was introduced to Serge by one of the kids living at Serge’s house. “Father Serge visited me at Aliabad Hospital in Kabul and took me to his house, where 25 other kids were living. He sent us to schools and would pay for our stationary and school fees. He got a private teacher for us to help us with our studies at home,” recalls Wali.

Wali graduated from Isteqlal School but could not pursue his higher education for his disability. The 54-year-old Hamidi is now working with an aid agency in Kabul. “Father Serge was very kind and helpful. He helped me a lot in receiving treatments for my feet. He had a good taste, a good sense of humor, and was very supportive. He helped people of Afghanistan a lot,” Hamidi says.

“I always pray for him because he served us so much.”

Louis Massignon, a prominent French orientalist and Islamologist, was Serge’s professor, and Corben Henry, French philosopher and Islamologist was his friend. Like them, Serge tried to build a bridge between civilizations and cultures of east and west, Islam and Christianity.

In private conversations, he would talk about “otherness” and its problems. “Why are there many religions though there is only one God,” he would question. He strongly opposed any kind of intellectual or religious dogmatism and called Islamic fundamentalism a monster.

Etienne Gille, a French teacher and aid worker, who was a neighbor of Serge in Pol e Mahmood Khan, Kabul, says that his house was a good place to learn about Afghan culture and Persian language. “When I visited his house, I saw a number of children living with Serge. Everyone called him father and communicated in Persian language with each other. His house was a good place where one could learn about customs, culture, and languages of Afghan people,” says Etienne.

After 20 years of living in Afghanistan, during the presidency of Babrak Karmal in 1983, Serge, was accused of spying and forced to leave Afghanistan. His seven adopted children, including Alireza and Wali, were imprisoned.

In the second half of 1990s, when the Taliban regime took control over Kabul, they arrested Wali on accusation of conversion to Christianity. Wali’s neighbors accused him of being converted to Christianity. “The Taliban came and put me in a box. They decided to execute me but thanks to a relative, I was released and escaped the area,” says Wali. “Father could easily convert us to his religion but he never did.”

In 2003, with the help of one of his adopted sons, Serge visited Kabul and went to his old house in Pol-e-Mahmood Khan. He lived with his sons for a few days. “Serge planned to start his activities again in Afghanistan. He wanted to spend rest of his life here, but it was not possible because he had become very weak. As he had operated one of his legs, he did not have the facilities and condition to resume his previous activities here,” says Hamidi.

Serge de Beaurecueil passed away on March 02, 2005 in France. Based on his will, a verse of Khawaja Ansari poem has been written in his grave stone: “If visit my grave, do not be surprised to see this dancing monument, bring your tambourine, for sorrow does not fit in feast of God.”

Alireza Hamdard, who is healthy and able to walk, admits that he would not be able to walk by now if Serge de Beaurecueil would not adopt him. “I always pray for him because he served us so much.”