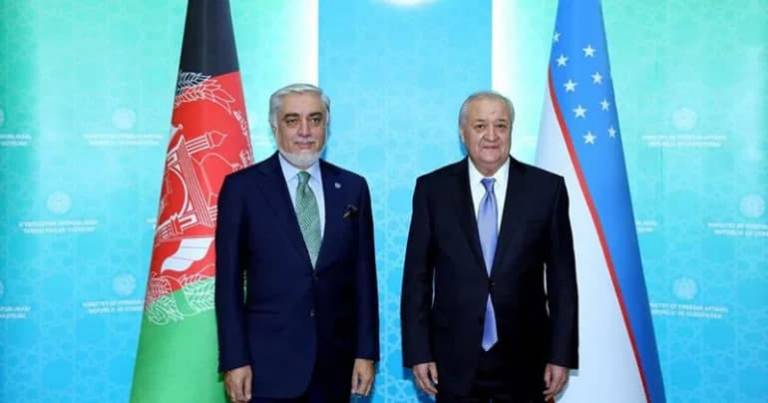 Condemning recent escalation of violence across Afghanistan, Abdullah has asserted in the meeting that no one must seek to obtain political concessions by escalating the violence level, according to a statement issued by the HCNR office today, November 11.

Reiterating on the Afghan government’s commitment to seize the current opportunity for bringing about peace in Afghanistan, Abdullah has also called on the Taliban to use it for bringing peace and stability to the country.

“Bringing peace to Afghanistan can help us to ensure security in the region, combat the terrorism and extremism, and achieve economic development,” Abdullah was quoted as saying in the statement.

He has also emphasized the importance of Uzbekistan’s role as a neighboring country in the Afghan peace process.

Abdullah has also met Sardor Umurzakov Uktamovich, the Deputy PM and Minister of Investments and Foreign Trade of Republic of Uzbekistan. “We discussed the Afghan peace process, peace talks in Doha, trade, investment, & bilateral relations between the two countries,” he wrote on twitter.

Afghanistan’s peace and stability is key to the region’s development, economic growth, and broadening regional cooperation, the Uzbek deputy PM was cited as saying in the statement issued by the HCNR office.

Accompanied by a high level delegation, the HCNR Chairman left Kabul for a two-day visit to Tashkent yesterday, November 10, on an official invitation. In his visit to Uzbekistan, which is aimed at strengthening regional cooperation in support of the Afghan peace process, Abdullah is set to meet high level officials of Uzbekistan, including the country’s president, Shavkat Mirziyoyev.

Abdullah has previously visited Pakistan, India, and Iran in a bid to seek the countries support for the ongoing peace process.

This comes as negotiating teams of the Afghan government and the Taliban are bogged down on finalizing a negotiating procedure and principles in Doha since September 12.

Second Vice President, Sarwar Danish, has recently called on the new US administration to consider a “thorough revision” of the Afghan peace process. He further accused the Taliban of creating barriers against the peace process.