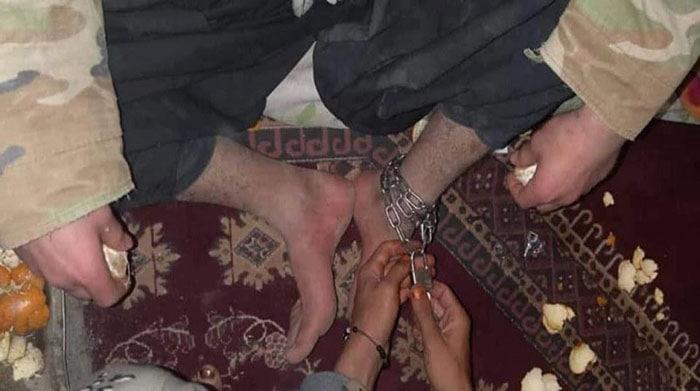 I will not go back to national army

“On my way to Kabul from Kandahar, our bus was stopped by the Taliban in Zabul. They got up into the car, stopped by my seat, asked where I came from. Kandahar, I replied. The militant asked me to hand over my phone to him. I had [deleted all photos and evidence] proving me being a member of security forces, and I was not worried. He connected a USB drive to my phone which recovered my deleted files, [and] asked me to get down, started beating me so violently that I fainted. When I regained my consciousness, I found myself in a dark place alone. Within eight days, the number of prisoners reached eleven who were all chained.”

The story above is an account narrated by the 25-year-old Ahmad (a nom de guerre) who along with 42 of his companions managed to escape Taliban captivity after two weeks of being held in their detention. Ahmad says the Taliban would punish them brutally. “[The] Taliban do not respect human values,” he says, after being held in their custody.

In 2017, Ahmad joined Afghanistan National Army (ANA) and over the last three years he had served in Kandahar province, south of the country. Ahmad’s story of captivity in Taliban detention tells a horrifying account about how the dragging war in Afghanistan turns human fellow mad to an extent that they forget their humanity. It was the bitterest experience he has ever had in his 25 years of living, Ahmad says. “He is a servant of infidels, do not give him water,” he tells as quoting a militant. We, five captives, were chained in a dark room, Ahmad says, and he guesses it was somewhere in Naw-Bahar district of Zabul province.

He claims that the Taliban militant tortured them severely, and without permission of the militants they would not even perform their prayers.

The Taliban, however, has always denied bad treatments with their foes, the government forces.

“They [can] do nothing. If the place gets disclosed, we will then surround it by planting mines and leave the area. These prisoners either die by airstrikes or they kill themselves by stepping on bombs,” Ahmad recalls, as quoting a conversation exchanged between Taliban militants. This terrifying Taliban plan, he says, forced them to attempt escape. On the fifth night, when he along with his five other captives were transferred to another room—where he joined a larger number of captives—there they agreed to a plan which only had one percent chance of success and 99 percent failure.

It was exactly 8:00 PM that night, when the hostages were unchained for dining and doing praying. Ten captives were being escorted by one armed militant, Ahmad says, we attacked the militant, tightened him up, and before the two other militants were informed, we attacked and chained them up. With a Kalashnikov and two walkie-talkies, we moved to an unknown direction in the dark night, Ahmad recalls.

After an hour of walking, having fear of being followed by the militants, we were divided in two groups of 23 and walked in two different directions. We walked all the night and around 8:00 AM in the morning, we reached to a security checkpoint in Shahjoy district of Zabul province, he says.

Ahmad says they were transferred to Shahjoy district and by a military helicopter, they were all taken to headquarters of the 2nd Brigade of the 205th Atal Corps, where the second group joined them. Ten people, who were members of ANA, were taken to Kabul by a military helicopter and Zabul governor ordered the authorities to transfer the rest to Kabul as quickly as possible, he says.

After four days of waiting, Ahmad came to know that they had no other choice but to travel by road to Kabul. Fearing being captured by the Taliban, they return to Kandahar again by road, and from there, he borrows money to get him an airline ticket.

Ahmad has returned home safely. He says that he will not go back to national army again because not only he and his companions received no reward but the government called their successful escape an achievement gained by security and defense forces.

A statement, issued by Ministry of Defense on October 10, said that more than 40 government prisoners including civilians were released from a Taliban prison in Shahjoy district of Zabul province as a result of operations launched by security and defense forces.

Zabehullah Mujahid, spokesman for the Taliban, confirmed the escape of the prisoners from a Taliban custody in Zabul province. He, however, denied any torture or punishment in the hand of militants.

The warring parties in Afghanistan do not have proper facilities for war captives. Rights group calls on both sides to respect human rights and dignity of those in custody.