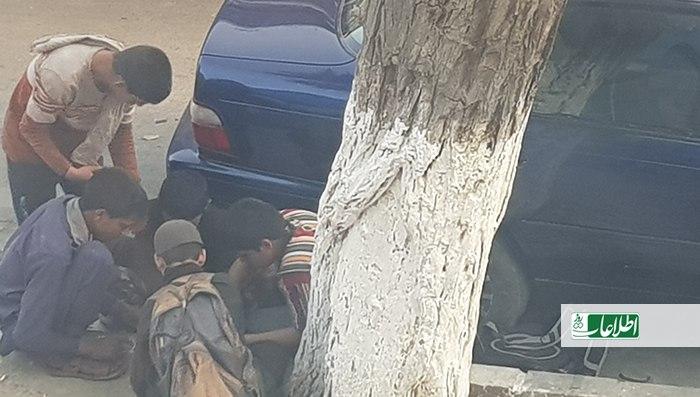 Hamid is in hurry to leave his home for work. He wants to reach the street before other street children so he may earn more money than other child labors. He takes a piece of cloth, bucket of water, and a used iron can for burning esfand seeds with him. The 10-year-old Hamid is the only breadwinner of his family. Hamid has to afford daily expense of his family. He uses hashish and everyday he has earn money to buy hashish too.

A large number of Afghan children aged between five to 15 work for a living or to help their families. Many are employed in jobs while most of them burn esfand to make a living. Among children working on the streets in Kabul, some of them are addicted to drugs.

11-year-old Nasim is Hamid’s friend. They have been working, playing, and using fuel to get high together for the last two years. Nasim used to smoke cigarette but over last two months, he has started using petroleum too. “I did not like the smell of petroleum first, my friends told me that petroleum is like cigarette, people will like it gradually. They were right because I enjoy and sniff it every day,” he says.

The unpleasant smell of petroleum, oil paintings, and glue has a psychoactive impact which is addictive. Some people in Afghanistan smell petroleum unless they get high. Research shows that smelling petroleum causes physical and psychological damages.

According to official figure published by the Ministry of Public Health (MoPH), 85,000 to 110,000 children aged five to 15 are addicted to various drugs.

Masuma Jaffari, deputy spokesperson for MoPH, says that currently there are 20 rehabilitation centers for women and children across the country. There will be four more centers in Daikundi, Bamyan, Kunduz, and Kandahar provinces.

Except his oldest brother, no one at the family knows about Nasim’s addiction. Nasim has five siblings—three sisters and two brothers. His father has back pain and is not allowed to do construction works.

Hamid’s life account tells a painful story. He has lost his father at the age of eight. “When my father was alive, our life was relatively good. I was not responsible for supporting my family, but since I lost my father, I quitted my studies and search for works to have an income,” Hamid says.

There are children, who escape home and school and work on the street and make money to buy drugs.

The 14-year-old Ali stops by each shop and begs money from passersby. Along with a number of his friends, Ali escapes school, work on the streets. They smoke cigarette and sniff naswar. “Once my mother found a cigarette in my pocket; she punished me for it. I lied to her saying that the cigarette was not mine. She trusted me and didn’t tell it to my father,” Ali says.

Ali’s parents do not pay pocket money to him; he recites poem for shopkeepers and drivers to earn money and buy cigarette and naswar. Once or twice a week, he escapes school and goes to the other side of town to earn more money.

According to officials at Ministry of Labor and Social Affairs, there are nearly 2.1 million child labors aged five to 17.

Hamid and Nasim work long hours with little or no pay. Sometime they make no money and some taxi drivers often curse them.

“People are unfair to us. We are workaholic, but at the end we are only paid 20-30 afghanis. Working with these people has never been easy; we smoke our anger away with cigarette,” Hamid says.

The nearly four decades of war in Afghanistan has left thousands of children as orphans most of whom do not have access to schools and education. The extreme poverty of Afghan families drives many children into tough labor in a country which remains one of the poorest in the world.

Unlike Hamid, Ali does not like to be called drug addicted. He smokes four to five cigarettes a day. According to him, only his friends who smoke opium and cannabis are addicted, not him.

He washes cars but sometime begs for money. Like many Afghan children, Hamid is trapped in poverty and drug addiction. He earns an average 30 afghanis per day.