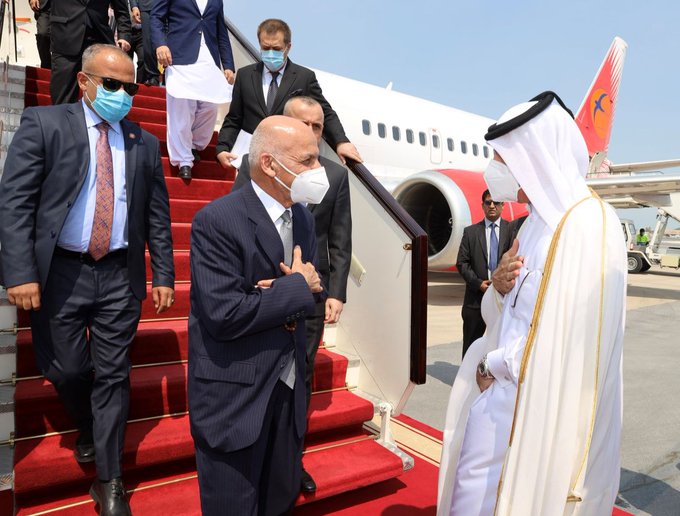 President Mohammad Ashraf Ghani has landed in Doha to attend a bilateral meeting with the leaders of the Gulf State but he will not hold talks with Taliban leaders even as peace talks between the negotiating teams of the Islamic Republic of Afghanistan and the Taliban movement are underway in Qatar’s capital, according to officials.

President Ghani, accompanied by a high level delegation, was set to first land in Kuwait to attend the funeral of the late emir of Kuwait, Sheikh Sabah Al Ahmad Al Jaber Al Sabah. On his official visit, Ghani is said to meet with Kuwait Prime Minister Sabah Al Khalid Al Sabah. Later today, October 05, he will travel to Qatar, according to the Afghan ministry of foreign affairs.

The Afghan President will meet with negotiating team of Islamic Republic of Afghanistan in Doha.

Under US-Taliban peace deal, negotiations between the Afghan government and the Taliban that started last month with an aim to bring the warring sides to discuss a power sharing deal but little progress has been made so far as the two side have bogged down in setting principles and procedures for substantive talks, according to reports.

Under the deal, the US will withdraw its forces from Afghanistan by May 2021 and in return the Taliban will make counterterrorism guarantee and reach a political settlement with the Afghan government.

Ghani’s visit to Doha, a country which has been hosting Taliban office for long, comes amid intensifying violence by the Taliban even as peace talks are underway.

On October 03, at least 15 people, mostly civilians, were killed and 42 others wounded in a car-bomb attack that targeted a government facility in eastern Afghanistan.

As many as eight people were killed and 30 others wounded, including civilians, in a suicide bombing that targeted convoy of Laghman governor today, September 05, in Mehtarlam, capital city of the eastern province.

No group claimed responsibility for the attack.

The grappling Afghan war continue to claim lives as suicide attacks and clashes continue. The Afghan government has been insisting on a permanent truce, something the Taliban appear reluctant to agree to.

On his two day Doha visit, Ghani will meet with Qatari officials to discuss bilateral ties and mutual cooperation in various areas, according to the officials. Ghani will also meet a Qatari business man.