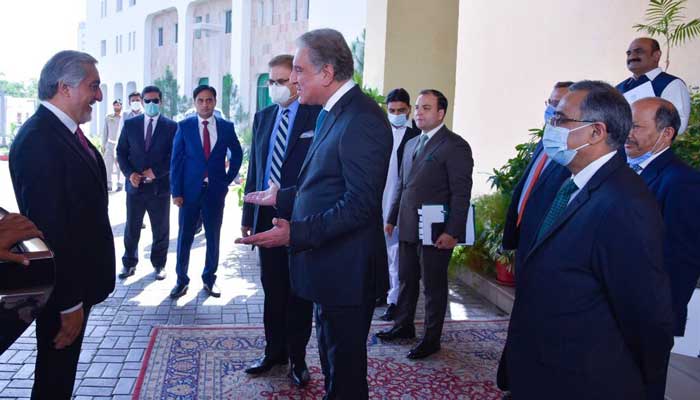 During his first visit in the capacity of chairperson of HCNR, Abdullah, speaking at the Institute of Strategic Studies, Islamabad, (ISSI), said the Afghan side expects their Pakistani counterparts to take a practical step for Afghan peace.

The intra-Afghan negotiations kicked off on September 12, in Doha, Qatar, after a long delay. The two negotiating sides are working to set principles for talks. A contact group of the two parties has been meeting daily to work out principles for substantive negotiations.

But the road ahead of talks is difficult.

The Taliban negotiators up till now have shown little compromise to bend their positions. They have come with tow demands in their hands: any talks between the group and the Afghan government should proceed in accordance with provisions in US-Taliban peace agreement; and any likely difference rising between the two sides over the course of negotiations must be settled in the light of the Hanafi jurisprudence.

Some government negotiators, who have appeared on Afghan media, say that Taliban’s inflexibility to make compromise for genuine and honest negotiations will close the door for peace talks and political arrangement. Hafiz Mansoor, a member of government negotiating team, last week in an exclusive interview with 1TV said that the Taliban are reluctant to make compromise on their hardline stance, something which makes negotiations difficult, as Mr. Mansoor put it.

Progress in talks is slow, violence is intensifying

While peace efforts are underway in Doha, violence has intensified in Afghanistan, with the Taliban militants launching attacks on Afghanistan’s most peaceful areas. Over last week, the militant group attacked national forces in central Bamyan province as result of which four national police were killed and two others were wounded. The militants also maneuvered in Panjsher province for the first time in 19 years of their insurgency history. Recently, they launched attacks in Kunduz which triggered the Afghan air force to target their positions in the province.

Mr. Abdullah, in his meeting with Qureshi, pointed out that “progress in peace talks is slow while violence is intensifying.” He, however, expressed optimism for peace process, expecting the two sides in Doha to come to terms on principles for substantive talks and agree to a permanent ceasefire.

Relations between Afghanistan and Pakistan have long been shaky and insecure, with Afghan officials and their international counterparts accusing Pakistan for backing Taliban insurgency in Afghanistan as a way to gain its strategic goal and limit India. Islamabad, however, denies the accusation, saying it wants a friendly and ‘fraternal’ relationship with Afghanistan.

“Pakistan attaches high importance to its fraternal ties with Afghanistan, rooted deep in shared history, faith, culture, values and traditions. Pakistan fully supports all efforts for peace, stability and prosperity of the Afghan people,” read a statement issued by Pakistan’s foreign ministry. “The visit of Dr Abdullah Abdullah will contribute to further strengthening amity, brotherhood and close cooperation between the two countries.”

Pakistan played a significant role in providing ground for Afghan peace. At this stage, it can play a more significant role for Afghan negotiations; we expect Pakistan to stand along with people of Afghanistan. A vast majority of Afghans yearn peace. Afghanistan has changed ever since 2001, and the hard-gains the country has achieved must be protected, Abdullah said, during his visit to Islamabad.

Pakistan’s foreign ministry has said that peace in Afghanistan will bring stability in the region—especially Pakistan. Speaking at ISSI, Mr. Qureshi underlined that the Afghan dilemma has no military solution. He said that Pakistan will fully support all efforts for the peace, stability and prosperity of the Afghan people.

“Dr Abdullah Abdullah’s visit will provide an opportunity for wide-ranging exchange of views on the Afghan peace process and strengthening of Pakistan-Afghanistan bilateral relations and people-to-people interaction,” said a statement issued by Pakistan’s foreign ministry.

Need to move beyond old polices

Pak-Afghan relationship has long been rocky. The Afghan government has been accusing Pakistan of backing Taliban insurgence, an accusation which Pakistan has called baseless. The soft-spoken Pakistani diplomats have over-repeatedly said that Pakistan wants a peaceful and prosperous Afghanistan nonetheless Taliban’s ties with elements of Pakistan’s security and intelligence apparatus has remained an unresolved issue for the Afghan side.

New opportunities have emerged in relations between the two nations. We need to go beyond conspiracy theories which have kept us backward, and open a new chapter in history of our ties. We should hold a new approach; more than ever, now, we need to see our region as a united region, the chairperson of HCNR, speaking at ISSI, said.

Mr. Abdullah underlined, “We need to see at realities of our region in last 30 years, and bear the geo-political and geo-economic shifts [in our minds]. We should learn lessons [from past]. Would we have not been in a better situation if we had adopted a win-win approach, moderation, [promoted] regional connectivity, trade ties and transits, and [promoted] cooperation between merchants,” he asked.

The two nations need to reconsider their strategic policies; we need to hold new approaches. We need to discuss our challenges and problems and find mutual solutions for them. We must understand that peace and stability in Afghanistan, or in any south Asian or central Asian country, will bring positive consequences and unification in the region, Abdullah said.

The Pakistani diplomats welcomed Afghan peace delegation at a warm and friendly environment. Shah Mahmood Qureshi termed the visit as a new phase in Kabul-Islamabad relations. Qureshi noted that Pakistan is committed to respect Afghanistan’s national sovereignty. He said the region has much to share in terms of regional cooperation and connectivity. Mr. Qureshi, speaking at ISSI, underlined that there is a dire need to learn lessons from past and mark a new chapter in Pak-Afghan relations.

Hours later after meeting with Abdullah, Khan wrote on Twitter that Pakistan border in Khyber Pakhtunkhwa will be remain open on Tuesdays, Wednesdays, Thursdays and Saturdays.

Abdullah’s visit to Pakistan comes at a crucial time when the US prepares for withdrawal while the Afghan parties in Doha have bogged down in setting principles for substantive peace negotiations.

Earlier on Saturday, September 27, Pakistan’s Prime Minister Emran Khan in an op-ed published on the Washington Post, wrote, “A hasty international withdrawal from Afghanistan would be unwise. We should also guard against regional spoilers who are not invested in peace and see instability in Afghanistan as advantageous for their own geopolitical ends.”

Esmatullah Soroush, Etilaat-e-Roz’s reporter, has also contributed to this story.