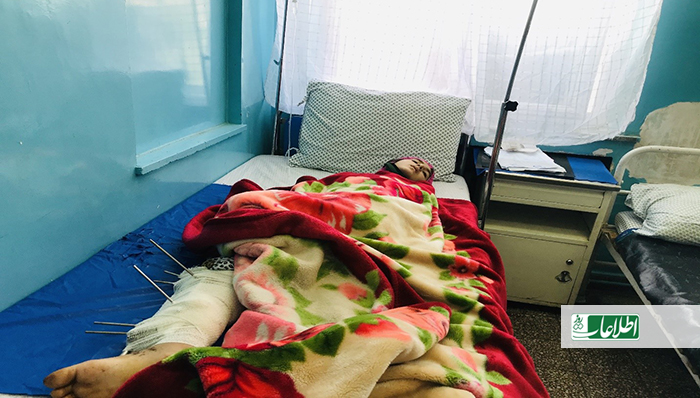 The 13-year-old Hosna, who has been hospitalized for weeks in Wazir Akbar Khan Hospital, is waiting to receive call from her parents and siblings, not knowing that she is the only member of her family who has survived the deadly Parwan flood.

Hosna, according to doctors, has serious injuries in her leg. The doctors are working hard to treat her and prevent amputation.

Shocked by deadly flood incident, Hosna does not remember much about the night flash flood wiped out part of Charikar city in the northern Parwan province. The only thing she remembers is her father’s repeated call: wake up, the house is collapsing. She does not know about her sister’s whereabouts. All she remembers about her siblings is a murky image: I saw my brother drowning and my sister was beside me.

Charikar, the capital of Parwan province, was hit by deadly flash flood in late August. The flood left nearly 160 deaths and injured thousands.

The flood was so sudden as a large number of people took it as an earthquake. Fahima, Hosna’s aunt, who was injured in the flood, and now looks after Hosna says, “the sound of flood was loud and scary. We woke up immediately, as we were escaping, the roof collapsed.”

After the flood, Fahima found herself in a hospital, not knowing when and how she was taken to the hospital.

Hosna was saved by a stranger who took her to hospital, says Hosna’s relatives.

Doctors at Wazir Akbar Khan Hospital say that the possibility of amputation for Hosna is high.

Sayed Abdullah Ahmadi, head of Wazir Akbar Khan Hospital says, “When I saw Hosna, her thighs and legs were filled with mud and sands. She needs to undergo a long-term treatment. If there is a 10 percent chance of treating Hosna’s leg without amputation, we will go for it and save her.”

Hosna has undergone four operations so far. Doctors say that Hosna’s foot has seriously infected and this has increased the risk of amputation.

Fahima says that flood has taken everything from her. She says, “She has not received any aid yet. I have received a pair of clothes from someone, but I have no home and place to spend my night at. Hosna is wounded badly, and I have no money to pay for her treatment.”

A number of national and international organizations along with individuals initiated to help flood victim.

In the wake of the incident, Office of The President instructed State Ministry for Disaster Management and Humanitarian Affairs to provide immediate assistance to those infected by floods in Parwan. The government allocated 90 million afghanis for reconstruction project in the flood hit area of Parwan.

The European Union (EU) announced that they have provided 13.7 million afghanis for those infected by floods in Parwan, Kapisa, Maidan Wardak, Paktika, and Panjshir.

Hosna may never forget the night flood hit her home.  “Seven years later when I graduate from school, I will study medical [science] and become a doctor. Since, I am hospitalized here, everyone has treated me like their sisters. So I will be a doctor in the future to help others,” she says.

Hosna says that her first wish is to make a reunion with her mother. “I will go to my parents, and then together we will go to our home in Charikar.”