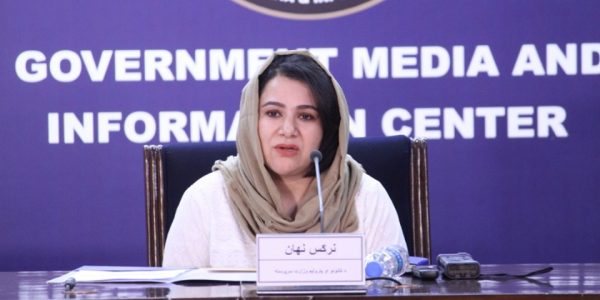 Charged with “corruption, abuse of authority, and deception of the High Economic Council” Nargis Nehan, former caretaker of the Ministry of Mines and Petroleum (MoMP) was introduced to the Attorney General Office (AGO) on Wednesday, August 26, along with 18 employees of the Ministry, according to a source at the MoMP.

The decision was made after a study of the contract signed between the MoMP and the Naser Omid, the contractor for extraction of Ghorian salt in the western Herat province. The study has found that the contract was mired in corruption.

In December 2017, the Afghan government signed a contract for extraction of the salt mine with the local company, Nasser Omid. The company was supposed to extract up to 25,000 tons of salt annually.

Later, in March 2018, President Ghani banned extraction of Ghorian salt for alleged presence of lithium in the site of mining, a decision which ended the contract signed with the mining company.

However, the illegal extraction of the salt continued for subsequent years allegedly by locals, the contractor company, and the Taliban, as covered in an investigative report published by the daily Etilaatroz. The main concern which led to termination of the mining contract was presence of lithium in the mineral deposit. 12 days after the report was published, head of Herat’s mine and petroleum department, Zia-ul Haq Popal, said that President Ghani had ordered related local and central institutions to address the illegal extraction of the mine. He also confirmed that those who were involved in illegal salt extraction had also stopped their operations in the area after the report.

Popal, head of the province mines and petroleum department, had described security threats as one of the main barriers for which the MoMP couldn’t proceed with its mining plan and operation in Ghorian district.

The salt deposit is located 112 km west of Ghorian district and 170 km away from Herat city. The mine’s area is 74,000 hectares and share border with Iran.

Using basic equipment, the salt was extracted in an old-style way and transported through insecure routes to southern Afghanistan, Farah, and Herat city, after being packed in plastic bags. According to Popal, illegal miners extract up to 10,000 tons of salt from Ghorian salt deposit on annual basis.

As per account of the local official, increased illegal mining had sparked fears that millions of money would continue to flow into the pockets of the Taliban and armed groups.

In reaction to charges made against her and her case reference to the AGO, Nehan wrote on Facebook that the mining project was put on bidding before her appointment as caretaker of the MoMP. She added that several local companies had applied for extraction of Ghorian salt.

According to Ms. Nehan, the contract was awarded to a local company after completion of the due bidding process and approval of the High Economic Council.

The contract was, however, terminated following an “oral” order of President Ghani after the US Geological Survey (USGS) – a technical partner of the MoMP – informed about the possibility of lithium existence inside the mineral deposit. “The ministry of mines terminated the contract for [protecting] national interests and no corruption was committed,” Nehan asserted, saying that the study of the mineral site is still underway in cooperation with the USGS.

Accusing some for deception in what she called “incomplete review of the project”, Nehan stated that they did so to secure personal interests. “All information reported to the Attorney General Office are incorrect and I am accountable to the Office and the nation in this regard.”

Meanwhile, Jamshid Rasooli, spokesperson for the AGO, today, Thursday, August 27, confirmed to Kabul Now, that the AGO has registered corruption cases charged against Nargis Nehan and 18 other MoMP officials.