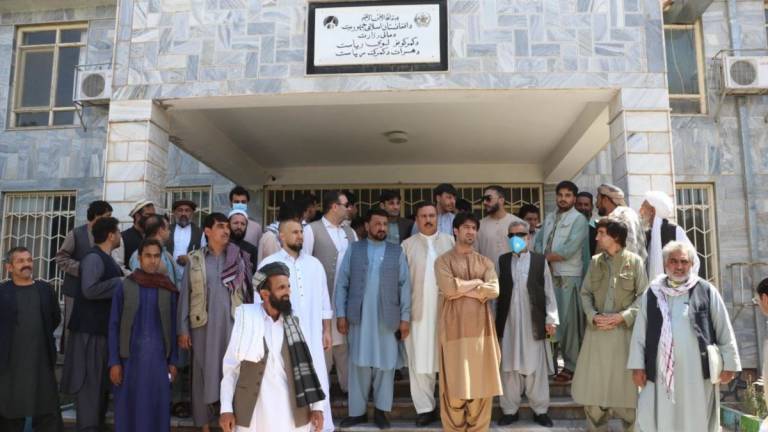 In response to growing insecurity across the highway connecting the western Herat city to Islam Qala port—one of Afghanistan’s largest ports—in the province, customs staffs have gone on strike in Islam Qala customs office. Speaking in a rally held Saturday, July 04, in front of old building of the customs office in Herat city, the protesters warned that they would not continue work at the port unless their security are ensured. The protesters warned that they would resign if security issue is not addressed.

They went on to accuse Afghan military and civilian officials of not doing enough to ensure security of the highway and the customs office. According to them, even office of the customs has been hit by mortar attacks.

Talking to Kabul Now, Ahmad Zia who is a service manager at the customs office and representative of the protesters, said that 15 kidnappings and eight murder cases against employees and business facilitators of the customs have occurred over past year across Herat-Islam Qala highway. “Ensuring security of the highway is our main demand. Our cars are shot and we are kidnapped. The armed men who are supported by mafias are involved in insecurities,” he claimed, warning that the continuation of such threats was no longer tolerable for them.

He said that they will continue their protests until the government act against insecurity across the highway.

The customs revenue has decreased dramatically since the customs office was shifted from Herat city to Islam Qala. However, the customs staffs are of opinion that one of the reasons behind the decline in customs revenues is lack of security along the highway.

“The customs revenue increase when there are less security threats,” says Mustafa Hakimi, caretaker of the customs office. He says that the customs employees cannot collect revenues when they are not safe even in inside of the customs building.

Islam Qala’s customs office which was previously based in Herat city was shifted to Islam Qala port in a bid to increase the customs revenues. With more than a year passed and despite commitments to expand its administrative compound, traders and the customs staffs are still skeptical for lack of enough administrative buildings for the office.

Meanwhile, some traders are calling for bringing back the customs office to Herat city due to increasing insecurity along the highway and lack of required facilities in its current location.

“There is no facility and buildings for the traders in Islam Qala border and the traders are threatened every day. We are calling on the government to shift the customs office to Herat city as soon as possible,” said Jahan Zeb, one of the traders.

Nawab Khan, another trader, told Kabul Now that they cannot refer to Islam Qala border for fear of losing their lives as security threats are increasing along the highway leading to the customs office.

Herat’s governor, Sayed Abdul Waheed Qatali, had once said that he was consulting with government officials in the capital Kabul to re-shift the customs office to Herat’s city.

Roadside bomb explosions have recently shown an ascending trend across Islam Qala – Herat highway as three policemen were killed and three others wounded in a latest incident took place on Saturday, July 04, as per the account of Aminullah Haftbala, district governor of Herat’s Kahsan district.

The local official added that it was the third deadly explosion along the highway over past month while five roadside bombs – mostly planted by the Taliban and mafias – were defused by Afghan security forces in the same period.

Islam Qala is one of Afghanistan’s major ports through which most of the goods needed in Afghanistan is imported, particularly Iran-made products. When it comes to fighting the corruption in customs offices, all the authorities are just reiterating the time and again to combat the phenomena but in vein.

Though the re-location of the customs office to Islam Qala port was aimed at increasing the revenue level and reducing corruption, it has made the office more vulnerable against corruption and caused the office revenues to fall by 50 percent.

Herat’s governor, Sayed Abdul Waheed Qatali, has repeatedly reiterated on the fight against corruption and mafias involved in corruption at the customs office. “The corruption cycle is clear and involved in insecurities. The mafias are present around the customs office, inside and outside Herat, and also along the routes. Perhaps their network is widely expanded but I will stand against them,” he told reporters during a press conference held last Thursday, July 02.

Expressing repeated concerns over peculation of the customs revenues, Herat’s Provincial Council has further criticized the Attorney General’s Office (AGO) for not investigating the dossiers of those accused of corruption in the customs office.

Although Herat’s prosecutor office does not provide a specific number on how many corruption cases of the customs office have been investigated, Abdulhaq Ahmadi, chief prosecutor of Herat assured of a serious and decisive fight against corruption. “Fighting decisively against corruption in revenue generating agencies is one of government’s and the AGO’s top priorities. You should be assured that all the corruption cases will be investigated accurately, legally, and rapidly,” he added.

Upon order issued by the governor, around 59 trucks drivers who were suspect of escaping to pay customs duty were sent to Herat’s former customs office to get their trucks’ loads rechecked.  However, nothing has been revealed about how the trucks were checked and what happened with them by Herat’s local authorities. The local authorities are rejecting to comment regarding the issue.

Abdul Haq Ahmadi, Herat’s chief prosecutor, told Kabul Now that Herat’s local government had the details on checking up those trucks. According to him, the results have yet to be sent to the prosecutor office.

“A joint delegation has checked the trucks for one or two days and the results of the investigation is not clear yet. We will share you the details whenever we receive the dossiers of the audit,” he noted.

Findings by Kabul Now, however, suggest that few of those 59 trucks are currently kept inside the old campus of Herat’s customs office and most of them are already out without any details about the results of the audit conducted by the local authorities.